GPU-Z 2.38.0 will now detect if Resizable BAR is enabled

A big and important update has just arrived to the most popular GPU tool.

TechPowerUP’s GPU-Z will now be able to determine whether Resizable BAR is supported by the graphics card. If the GPU supports this new technology, the software will check whether it has been enabled in the system. The GPU-Z will report this information on the main tab, which means ReBAR support can now be quickly verified without going into advanced adapter settings.

Even more important update is the support for three unannounced graphics cards: Radeon RX 6700 non-XT, RX 6600 XT, and RX 6600 non-XT. Based on what we know about GPU-Z updates, it seems almost certain that we will see those cards in the future.

AMD Radeon RX 6700 is a cut-down Navi 22 graphics card that has recently appeared with 12GB memory, but previous leaks have suggested that the card might actually offer 6GB. At this point in time, it is unclear which configuration will be used. However, it would seem appropriate if RX 6700 non-XT had the same memory size as GeForce RTX 3060 which launched with 12GB.

When it comes to RX 6600 series, we can only speculate that the XT variant will also feature Navi 22 GPU. This is an educated guess based on the fact that the card has appeared on EEC (Eurasian Economic Commission) regulatory office with a 12GB memory. This indicates that the card has a 192-bit memory bus, which is not available on Navi 23 (the lower-end GPU), as it is limited to 128-bit. 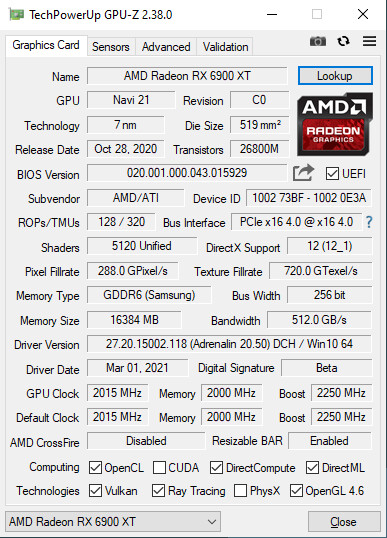