GPU prices in Germany are now the lowest since February

A sharp decline in GPU pricing in just 2 weeks

According to a report by 3DCenter, NVIDIA Ampere and AMD RDNA2 GPUs have now reached a pricing level from February.

The report is based on the German market, which tends to be more on the high side of the pricing spectrum. It is, however, by far the most consistent report of the current situation of the market. The data is collected from as many as 10 German stores and then compared month-to-month to generate a report.

At their current state, the GPUs are 53% more expensive than they should be (price above suggested retail price). While this sounds underwhelming, it is actually the lowest price since February this year, right before a sharp incline in pricing.

More importantly, though, there is a new stock of RTX 3060 Ti and the Radeon RX 6800 series now available, which wasn’t the case for quite a long time. A return to normal pricing may still take many weeks, as retailers and distributors will be reluctant to adjust prices to limit their loss on increased margins. 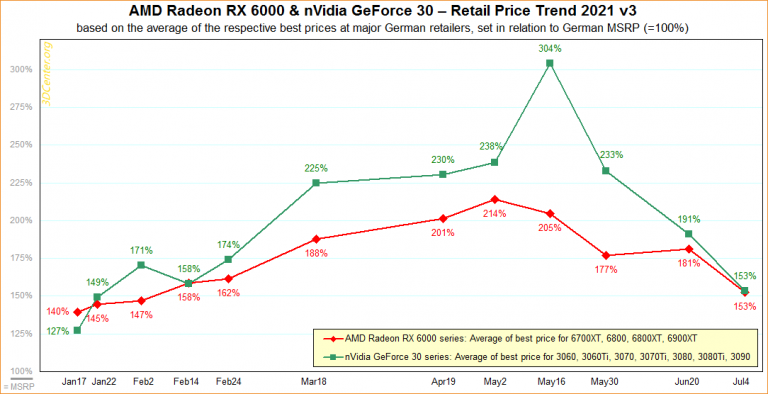 It is also worth checking on PCPartPicker price trends. Unfortunately, such a sharp price decline is not to be seen at bigger retailers who cooperate with the website (BestBuy/Newegg/Amazon, etc). Unlike 3DCenter’s report, PCP combines data from sites that offer affiliate links. It does, however, account for all existing promos, such as coupons, rebates, and reduced shipping costs. The following charts show RTX 3060 and RX 6800 XT pricing respectively.