The company has updated its CPU support list, effectively confirming all processors from the new series.

Gigabyte is now listing its brand new premium Intel Z790 series motherboards on their website, along with full specs and details on the updated chipsets. As it turns out, the company is now also confirming the full lineup of Intel CPUs from the 13th Gen Core series, even before Intel has.

Next week, Intel is set to launch its 13th Gen K-series SKUs, which include only 6 models, either with or without integrated graphics. These are 125W TDP SKUs unlocked for overclocking, and generally speaking, the most popular choice among Intel enthusiasts.

Those who can’t afford the K-series, or simply need less powerful CPUs with 65W or 35W TDP, will have to wait a little longer. Intel has thus far not confirmed when other SKUs will be released. However, it is expected that at least 16 other processors are to be released.

Thanks to the leak from Gigabyte website, we can now confirm that twenty two 13th Gen Core CPUs are now being prepared for launch: 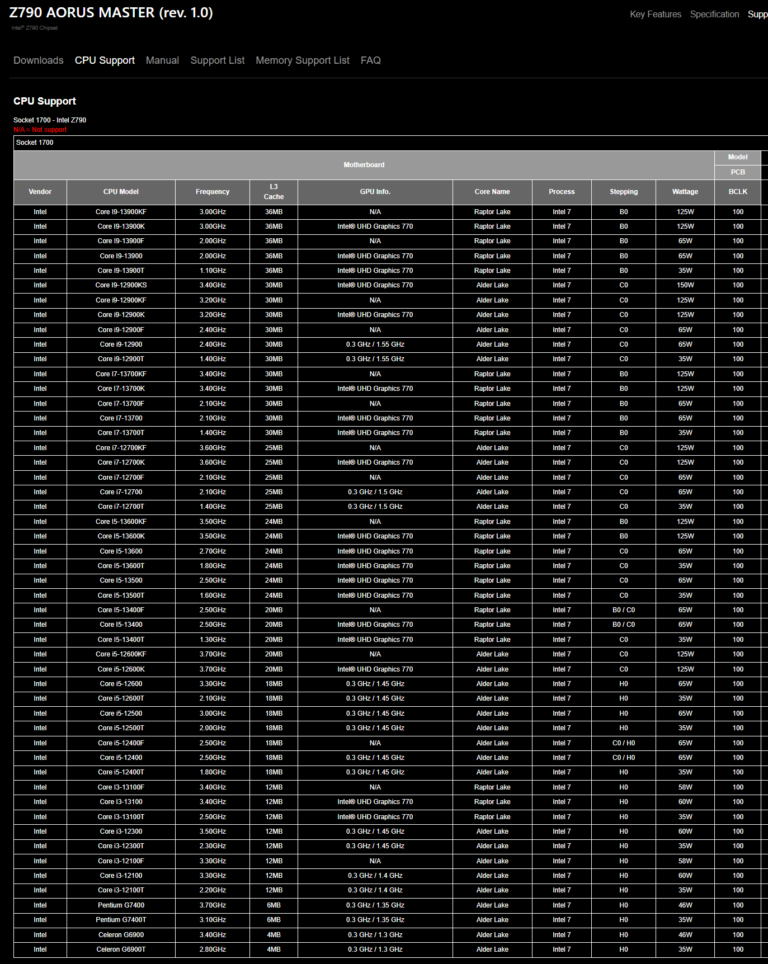 The list does not have the full specs, though. What is missing are core/thread configurations or even their maximum frequencies. The list does confirm which silicons are used by each processor, which was part of the pre-launch debate. It confirms the rumors about mixed Raptor/Alder lake dies in the 13th Gen Core series.

Intel Core i5-13400F and i5-13400 SKUs will be based on either B0 or C0 dies. This is not the first time Intel will use two different dies for one CPU, though. Intel has made a similar choice for its Core i5-12400 series, with China exclusive i5 12490F part based on the bigger die. At least in that case, it used a different SKU name.

All higher-end SKUs will be using new Raptor Lake dies, with increased L2 cache other optimizations. Furthermore, customers will have to pay close attention to Core i5-13600 series, which will be split between Raptor and Alder lake dies.

Intel is set to launch its 13th Gen K-series on October 20th. The company is yet to confirm the launch date for its non-K, T-series CPUs and cheaper B760 and H770 motherboards.