NVIDIA GeForce RTX 3060 Ti with GDDR6X memory has been tested

As a reminder, NVIDIA launched an updated version of their RTX 3060 Ti model in October last year. However, until now, we have not seen a proper review of such card, probably because availability of these cards was limited. The Polish site now has KFA2/GALAX RTX 3060 Ti G6X OC model at their disposal, and they made a comparison with RTX 3060 Ti and RTX 3070 cards.

The new RTX 3060 Ti features the same GA104 GPU with 4864 CUDA cores as its older sibling. The only real difference is the memory upgrade from 14Gbps GDDR6 memory to 19Gbps GDDR6X version. This means that the maximum theoretical bandwidth has indeed increased from 448 GB/s to 608 GB/s, but this comes at a cost of higher power (200W to 225W).

ITHardware tested the card in many games with at three resolutions: 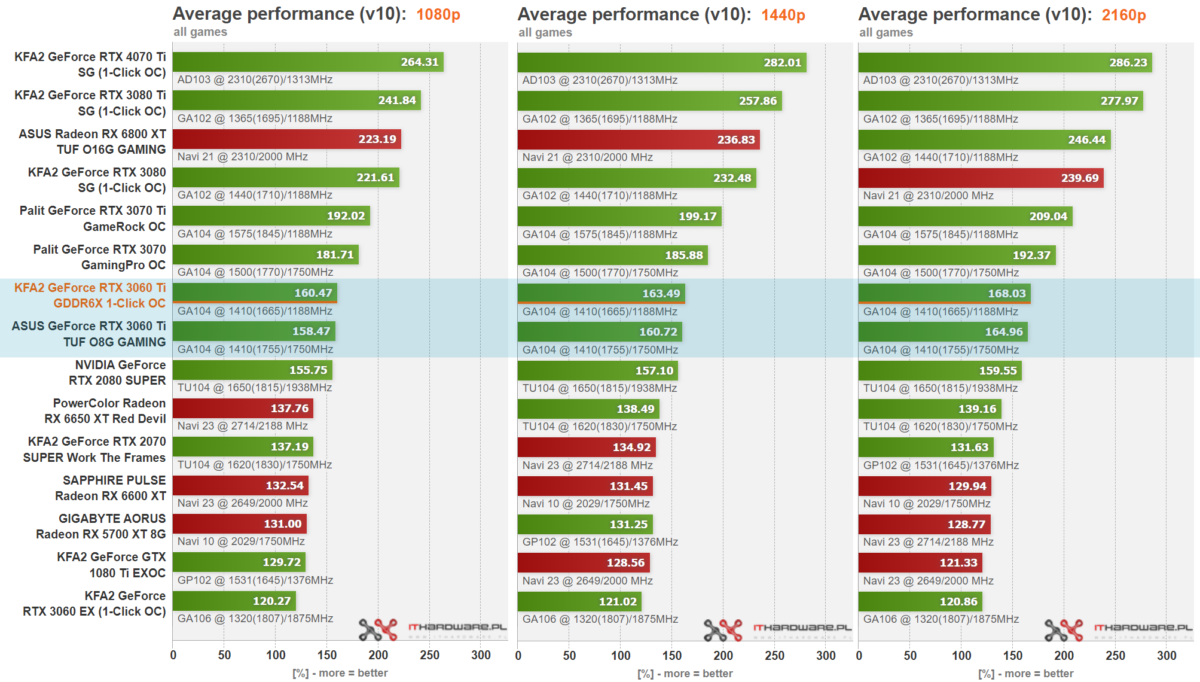 Needless to say the performance increase is minimal, around 1 to 2%, however there is one critical thing that should be noted first. The ASUS RTX 3060 Ti TUF model that was used for comparison (based on GDDR6 memory) is a factory-overclocked model with boost increased from 1665 to 1755 MHz, so that’s a 5.4% increase. Therefore, this is not a very good comparison, as such tests should be among similarly spec’ed models.

However, this tells us that the new card is faster than factory-overclocked variant. It is not a double digit increase, but it is definitely not 1-2% as the data may suggest at first glance.

In terms of overclocking, the card was successful boosted to 1815 MHz boost, which is around 150 MHz higher than stock. Furthermore, the memory could still be overclocked to 1263 MHz so 20.2 Gbps. Such results were possible despite locked TDP on this model. This provided a further 4% to 6% better performance compared to stock settings.