Researchers have developed and trained a neural network based on NVIDIA GameGAN to create something called GAN Theft Auto. This is an AI-trained game engine that imitates a simple driving experience in Grand Theft Auto 5. 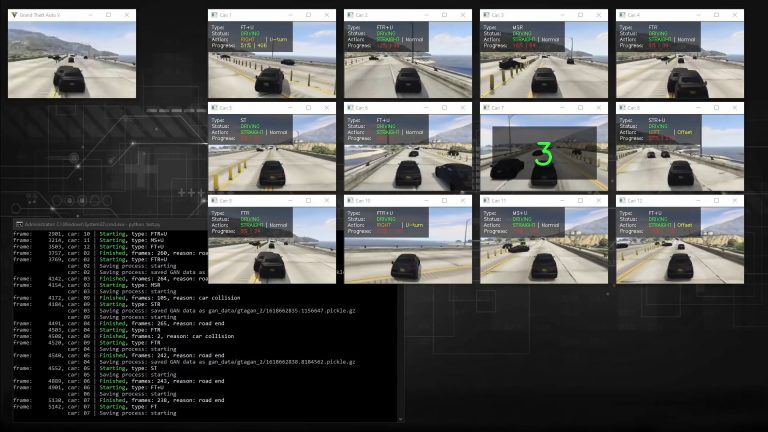 GAN Theft Auto is not a neural network trained to play GTA5, on the contrary, it’s a simple game engine that was taught to imitate GTA5 gameplay. Last year GameGAN (Generative Adversarial Networks) was used to recreate a PAC-MAN game. It required 50,000 episodes to fully train the engine that was created by the neural network.

GAN-based games require two competing neural networks, a generator, and a discriminator to create a convincing copy of the game engine. PAC-MAN is a simple game that was fairly easy to train, but things get much more complicated if such a neural network was to be considered for a popular world simulator such as GTA 5.

The researchers have borrowed a DGX100 station from NVIDIA for a short period of time. Since neural networks require a long time to train, they had to improvise to create a way to train their network quickly. What they came up with was actually quite interesting on its own, instead of launching the game multiple times to feed the data, they spawned multiple instances of cars driving in the same sandbox, except the cars were clipping through each other and were made invisible.

Simplified GAN Theft Auto gameplay only allows a very basic highway driving experience. The graphics are far from impressive, but they were improved using upscaling. The network can recognize collisions with barriers or other cars, but obviously, it is far from perfect.

This is just a short demo of what neural networks can achieve at their current stage. In the future, game developers may use neural networks to train their NPCs, game physics, or even create alternative storylines. Possibilities are endless.

Just a few months ago researchers from Intel have used neural networks to improve GTA5 image quality to overlay photorealistic textures and colors that imitate a real-world experience.