Ever since AMD announced its Smart Access Memory technology NVIDIA graphics card owners were asking if NVIDIA is planning to support this technology with their latest graphics cards as well. While support for older generations is not planned, NVIDIA did confirm it will enable ResizableBAR on its RTX 30 series models.

NVIDIA GeForce RTX 3060, the last graphics card from the RTX 30 series, is no longer the only model with ResizableBAR support. At the launch of this mid-range model, NVIDIA announced that it will exclusively feature ReBAR support with plans to enable this functionally on other SKUs later.

NVIDIA promised that Founders Edition models will receive ReBAR support by end of March. So far there has been no update from NVIDIA on this matter. However, it seems that some board partners are already offering BIOSes for other custom RTX 30 models that enable ReBAR support.

It is important to note that the software is being listed under very specific GALAX China and Gainward China models, not even the international variants. It is not guaranteed to work and we strongly advise everyone not to use these tools till your board partner confirms it will work with your card. 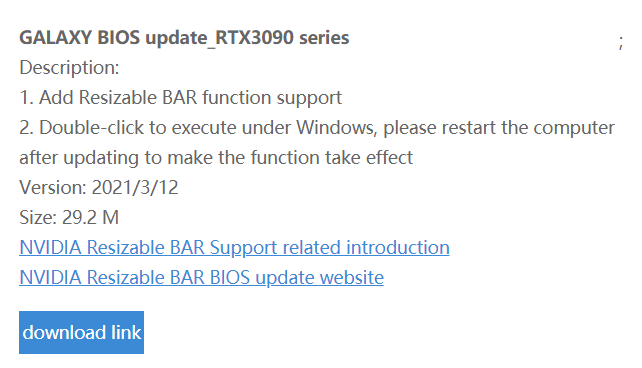 The downloaded file does not appear to be digitally signed by NVIDIA, but it does look like the official NVIDIA tool. The software is not really a custom BIOS, but rather a tool that modifies existing BIOSes on the graphics cards. Theoretically, it should work on all RTX 30 graphics cards.

Redditors have already confirmed that the tool works on non-Chinese variants such as GALAX RTX 3090 SG: 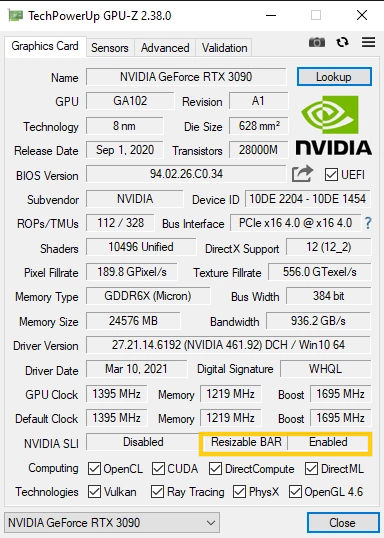 Please do not download and use those tools unless you are absolutely sure of what you are doing. VideoCardz shall not be held accountable if this software bricks your graphics card.