South Korean National Radio Research Agency has just been updated with a new submission from Palit Microsystems. The designs manufactured by Palit are used by multiple board partners, such as PNY or Gainward.

On the RRA website, there is a new Palit filing featuring RTX 3060 GHOST 8GB series. It would appear that the company is preparing an 8GB model based on RTX 3060 SKU. An 8GB memory capacity would require either a 128-bit bus or a 256-bit bus. The former is unlikely for this market segment, in fact, the RTX 3050 series should be the only 128-bit cards in the whole lineup. Those however were postponed until further notice.

It is very likely that the filing is a mistake by Palit. We have not heard about such an SKU yet, however, more information should become available next week as AIB headquarters return to normal operation after the Chinese New Year. It is possible that whoever submitted new models to RRA, made a simple mistake by not adding ‘Ti’, which would imply the higher-end model. 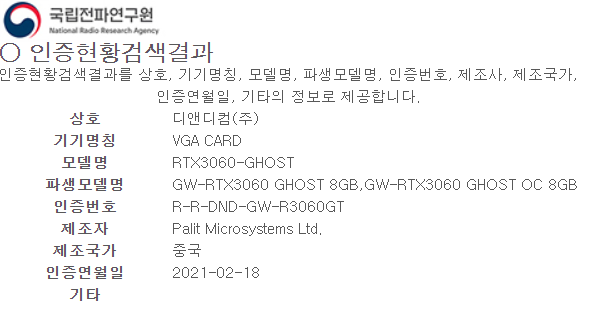