Full lineup of Intel Arc Mobile/Deskop, Arc Pro and Flex series with DG2 GPUs has been listed in MESA update

Mesa3D, the open source OpenGL/Vulkan driver for Linux now features all known consumer mobile and desktop Arc GPUs. This includes A7, A5 and A3 series, some of which were not officially released yet.

Furthermore, the update also lists Arc Pro series for workstations and recently announced Flex series for data-centers. What all these products have in common is the same GPU architecture: DG2/Alchemist:

Interestingly, there are still some IDs that are not attached to any known product. In this case, we are looking at yet unannounced SKUs or simply products that were abandoned. It is also worth noting that the detailed ID lists also features DG2-G12 GPU, a third Alchemist GPU that we have discussed before, but Intel has thus far not confirmed that it actually exists.

The G12 has been seen listed under different codename: SOC3 or DG2-256. The latter suggests it’s a GPU featuring 16 Xe-Core, so exactly half of the flagship G10. 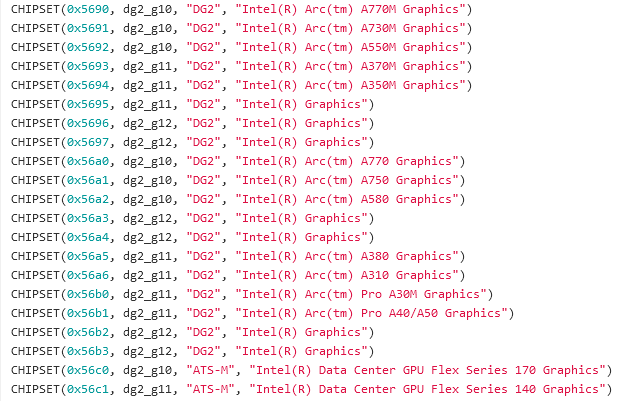 It is rumored that one of the SKUs listed as “Intel Graphics” is the upcoming A200M mobile GPU. This card might be even slower than A350M, possibly to act as an alternative to GeForce MX graphics.