The new RTX 30 is just around the corner.

Today NVIDIA is doing a strange launch of its latest Ampere GPU, the RTX 3080 12GB with GA102-220 GPU. The word ‘launch’ is a bit of exaggeration here, but at the same time, it is hard to consider this just an announcement when the embargo on both the reviews and preorders lifts on the same day. This is exactly what is happening with RTX 3080 12GB today.

NVIDIA has not publicly confirmed or even teased a possibility that there might be a new GPU being introduced, however is no longer a secret anymore. In fact, just as the rumors have predicted, the preorders will begin immediately after the introduction.

This fact has just been confirmed by Materiel.net, a large French retailer that will begin taking preorders today at 15:00 CET (a typical embargo hour for NVIDIA). The retailer says that there are definitely not enough cards for everyone, which indicates a limited launch.

Update: the retailer has removed the tweet, but we still have the copy: 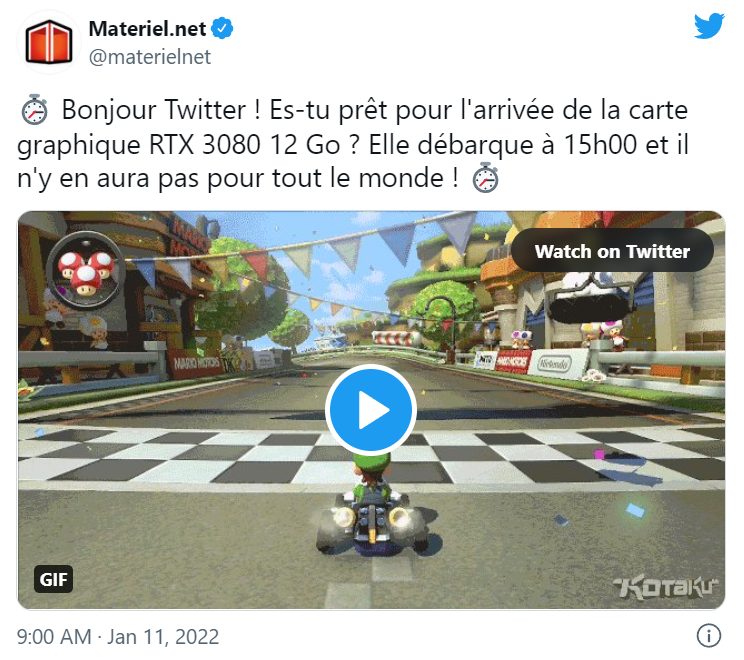 NVIDIA RTX 3080 12GB is a new high-end model equipped with 8960 CUDA cores and 12GB of GDDR6X memory. This card is a minor spec upgrade over RTX 3080 10GB which is probably why NVIDIA does not want to spend too much effort on turning this into a big launch.

Interestingly, NVIDIA is also to launch its RTX 3090 Ti and RTX 3050 GPUs by the end of this month, which makes this sudden appearance of a new SKU just as confusing as it could be. After all, not a single word about this card was spoken during NVIDIA’s CES 2022 last week.