A forum post by QuasarZone member alleged that EVGA RTX 3090 Ti graphics card development is at the very final stage of development. It should be noted that previous RTX 3090 Ti Kingpin rumors also originated on QuasarZone after the editorial team had an EVGA employee indirectly confirm that the card is in development during a Q&A livestream.

The new information suggests that the RTX 3090 Ti Kingpin would require dual 12-pin power connectors. This is the new generation PCIe Gen 5.0 power connector that we talked about. It has 12 standard pins and 4 data paths which are optional. It is unclear for now how manufacturers will call this connector, but it seems to be fully compatible with the existing NVIDIA 12-pin (Molex Microfit 3.0) connector.

By introducing dual 12-pin power connectors, the card could theoretically consume up to 1275W of power, which is a massive upgrade with nearly 750W more power than a potential 3x 8-pin configuration (max 525W). 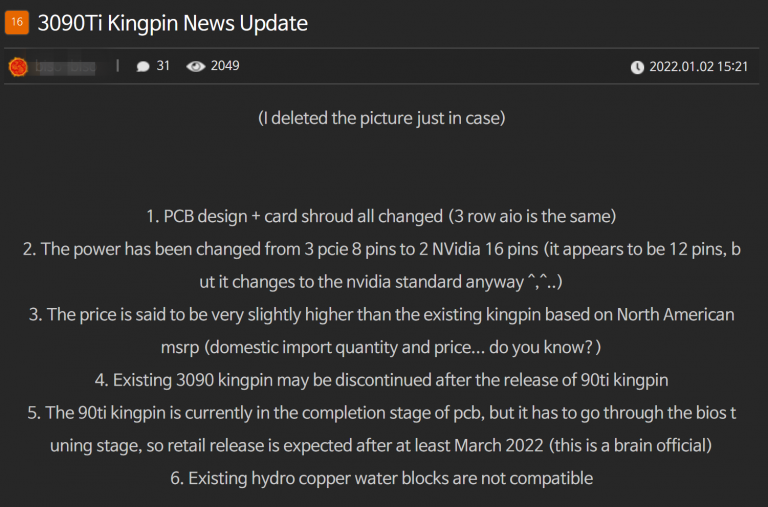 The rumors alleged that existing Hydro Copper water blocks for RTX 3090 Kingpin will not be compatible with the new model. It should also be noted that the power connector change is not the only major difference with the non-Ti model. The RTX 3090 Ti will also have half of the memory modules, as the new SKU is being upgraded to 16Gb (2GB) 21 Gbps memory.

The post further suggests that the existing Kingpin model might be discounted, while the new Ti-variant could be introduced a higher MSRP. The original had a suggested retail price of 2000 USD. The RTX 3090 Ti is now rumored to launch on January 27th. It is expected that NVIDIA will provide an update on this model during its CES 2022 press conference.