European Commission has fined Valve and five other game publishers for a total of 7.8 million euro for breaching EU antitrust rules

Users within European Economic Area (EEA) were restricted from buying PC games from different European regions. European Commission claims in a press release announcing fines on the publishers. Many publishers were selling games at a lower price for Eastern European countries which were locked to those regions and could not be activated in Western Europe. This geoblocking of the game purchases is prohibited in the EU and the Commission has decided to fine the publishers who were part of this antitrust activity:

More than 50% of all Europeans play video games. The videogame industry in Europe is thriving and it is now worth over € 17 billion. Today’s sanctions against the “geo-blocking” practices of Valve and five PC video game publishers serve as a reminder that under EU competition law, companies are prohibited from contractually restricting cross-border sales. Such practices deprive European consumers of the benefits of the EU Digital Single Market and of the opportunity to shop around for the most suitable offer in the EU”.

While the idea behind the decision is consumer-friendly, it seems unlikely for game publishers to suddenly lower the price for the whole EU. In fact, back in 2016, Steam dropped its Euro Zone 1 and Euro Zone 2 pricing policy, which before allowed game publishers to sell games at a different price point for certain regions. As a result of removing the EU2 zone, Eastern European countries have seen a sharp increase of game pricing on Valve’s Steam platform.

EU Commission claims that the geoblocking was imposed either through bilateral agreements between game publishers and Valve between 2010 and 2015 or in a form of licensing and distribution licenses between four out of five fined publishers between 2007 and 2018. 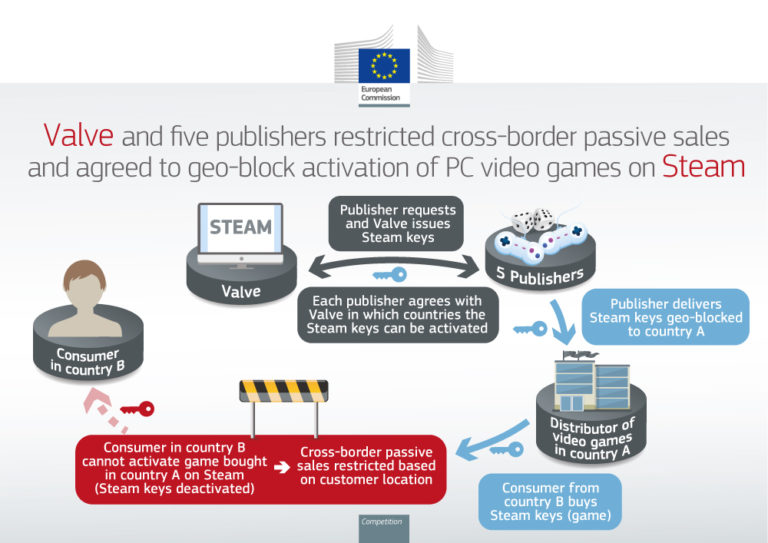 The Commission has reduced the fine for publishers who decided to cooperate with the Commission had they provided evidence that helped in the investigation. Valve has not cooperated and therefore no fine reduction was imposed.