During CES 2022 Special Address Jeff Fischer promised NVIDIA would have more details on its upcoming flagship GPU, however, no details were provided yet.

Today is the last day of January and we still do not know anything officially about this new card, except for what was already said at CES 2022. The company did not confirm pricing or the launch date which was supposedly set to January 27th as we have reported.

Currently, reviewers are waiting for their samples, which were unexpectedly put on hold recently. We have confirmed with multiple media outlets that samples were supposed to ship last Monday, but that was not the case. 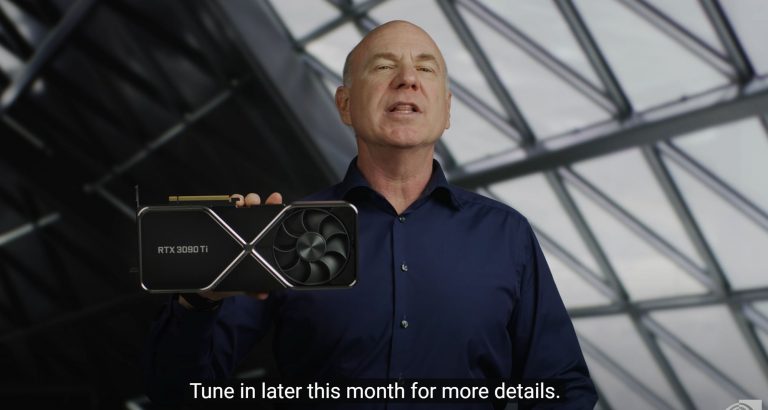 In Mid-January news broke that NVIDIA has requested all board partners to pause the production of their custom models. As we have learned the company encountered some hardware/BIOS-related issues. Despite numerous attempts, we have not yet heard about the details related to this issue though.

The RTX 3090 Ti is based on a full GA102 GPU with 10752 CUDA cores. This is also NVIDIA’s first GPU to feature 24GB of GDDR6X and 21Gbps memory. With its 384-bit memory bus, this card will provide up to 1 TB/s of bandwidth. The specs upgrade comes at a cost of higher power consumption, reportedly reaching 450W by default. NVIDIA reference model is to be powered by new PCIe Gen5 16-pin power connectors, but board partners are also expected to implement it.

Just recently, EVGA posted a teaser of its new Kingpin graphics card. Although it was not named, it is quite clear to be the upcoming RTX 3090 Ti. The PCB picture that was shared did not show any sign of standard 8-pin connectors.

It’s January 31st, 6 AM PST, the typical time NVIDIA lifts embargoes for its new products. It certainly does not seem we are getting an update on RTX 3090 Ti from NVIDIA today.