Update: The original report was inaccurate. Dell actually released a new version of the Aurora R10 system which is compliant with CEC power regulations. This system can be found on this website.

Original story: California’s Energy Consumption Tier 2 implementation has been put into effect on July 1, 2021. As a result, the power regulations will be even more conservative and require even more types of devices to meet the criteria in order to be sold in states that adopted such regulations. For Dell, this means is that certain Dell products can no longer be shipped to those states because they do not meet the criteria.

Users willing to order some of Alienware Aurora R10 or R12 gaming desktops will now see a message that those orders cannot be fulfilled. The ban on certain products appears to affect only some R12 systems and certain all R10 Ryzen Edition desktops.

Dell has provided a statement to The Register confirming that those products can no longer be shipped to those states:

Yes, this was driven by the California Energy Commission (CEC) Tier 2 implementation that defined a mandatory energy efficiency standard for PCs – including desktops, AIOs and mobile gaming systems. This was put into effect on July 1, 2021. Select configurations of the Alienware Aurora R10 and R12 were the only impacted systems across Dell and Alienware.

The regulations outline the maximum kilowatt-hour use per year for different classes of products.  The classes are divided by ‘ES’ which stands for expandability score. The score depends on a number of interfaces and additional power requirements arising from the use of add-in-cards and high-speed memory. 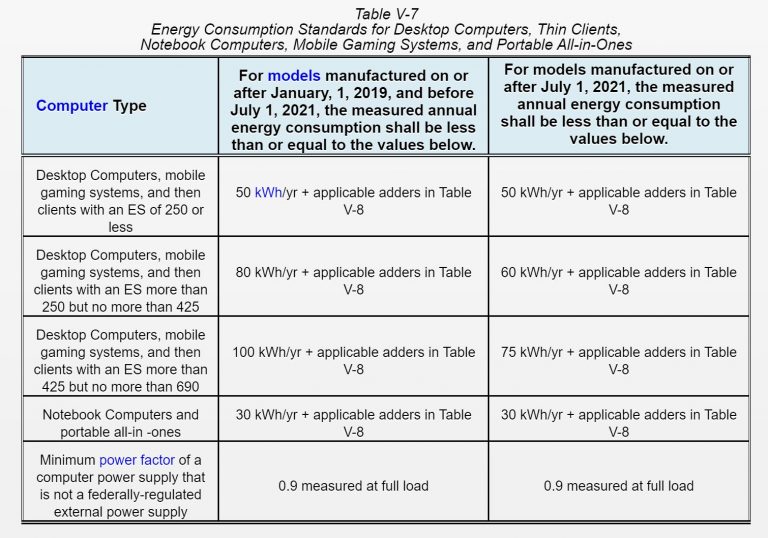 The maximum power use per year can be extended by special ‘adders’, which account for discrete GPUs, high-speed memory, or the type of storage that is being used.

As an example, a discrete graphics card not attached to the CPU substrate with a bandwidth of 256 GB/s will increase kWh/yr by 39.63. The buffer bandwidth does not appear to be the best choice here though, because it will certainly affect Radeon RX 6000 cards more than NVIDIA RTX 30 GPUs. In the case of Aurora R10 desktop systems though, this unfortunately affects all GeForce systems as well.