Earlier this month Intel launched six Alder Lake-S, desktop processors. However, the plans for this architecture go a lot further.

Intel is yet to announce its 65W models called non-K Core series as well as 35W T-Series for low-power/embedded systems. This does not even account for the whole mobile lineup where Intel is expected to make an important statement with CPUs offering up to 14 cores for the first time.

The date for desktop non-K and T-series CPUs launch is not yet confirmed, however, multiple OEMs have already begun listing such processors under possible configurations for their devices. The specifications could easily be found on the Japanese Dospara website which offers Galleria pre-built systems. Apparently, those systems will be offered with Intel Core i5-12400(F) CPUs at some point in the future. This CPU is to offer 6 cores and 12-threads and base clock speeds up to 2.5 GHz.

A Core i5-12600 non-K is to offer the exact same configuration, but the base frequency will be increased significantly to 3.3 GHz (+600 MHz). The interesting part here is the fact that Core i5-12600 non-K is actually listed with 125W TDP (Processor Base Power), but this could simply be a mistake. The specifications charts also listed Core i7-12700 with a base frequency of 2.1 GHz and boost up to 4.9 GHz. Meanwhile, the 16-core i9-12900 would have a base clock of 2.4 GHz and boost up to 5.1 GHz. All these frequencies apply to Performance cores.

Interestingly, the specifications of yet unreleased Intel 12th Gen Core CPUs have also been listed by Dell. An Alienware Aurora R13 system specifications include 6-core Intel i5-12400 up to 16-core i9-12900K SKUs. The company confirms in the product manual the core count and maximum boost clock for each of the SKUs. For some reason though, the Core i9-12900F appears to have a boost clock 100 MHz higher than Core i9-12900, but again, this could be another mistake, because typically such SKUs share the specs bar the missing integrated GPU support. 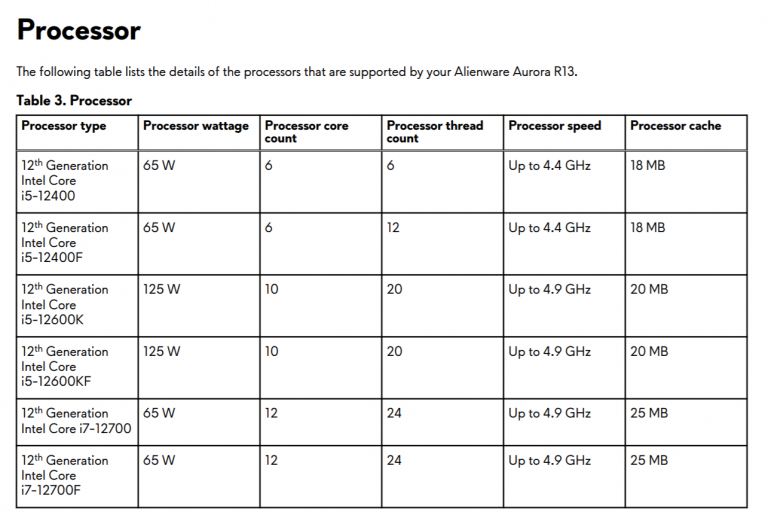 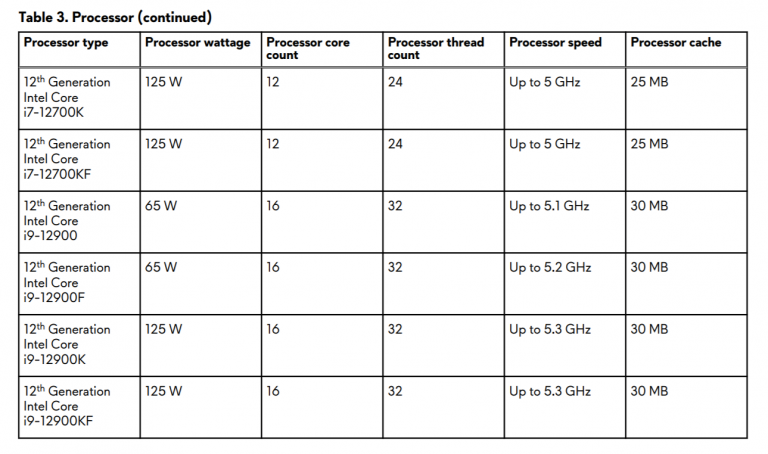 Furthermore, a list of low-power T-Series has been revealed by FanlessTech, who claim that the series will be available starting from early 2022:

We have put together a full list of all known Alder Lake-S CPUs. It is based on multiple sources, including the one just compiled by 3DCenter.