Earlier this week we covered a story that unfolded on Reddit and TechPowerUP forums on the topic of GeForce RTX 3070 Laptop GPU in Dell’s Alienware m15 M5 gaming laptop. As it was discovered, Dell has put a cut-down graphics card in this system which features as many as 10% of CUDA cores disabled.

What could’ve been a simple mistake, turned out to be an intentional decision by Dell. The manufacturer has decided to limit the performance on Ryzen 5000 series equipped Alienware m15 R5 systems. This is truly an unprecedented thing to see in a gaming laptop, considering that these days NVIDIA gives laptop makers a lot of flexibility in deciding which graphics card SKU to use and how much maximum power (TGP) it should have enabled. In fact, NVIDIA even allows laptop makers to choose which features to enable (Dynamic Boost, Optimus etc.). In other words, disabling CUDA cores is simply the last thing to expect.

Dell has confirmed to Jarrod’s Tech, who is currently testing the exact same laptop, that the decision to disable the cores on RTX 3070 GPU was intentional by their engineering team after ‘careful testing and design choices’. The laptop maker has also confirmed it may enable more cores in the future, which just shows that the decision to limit CUDA core count made completely no sense in the first place. 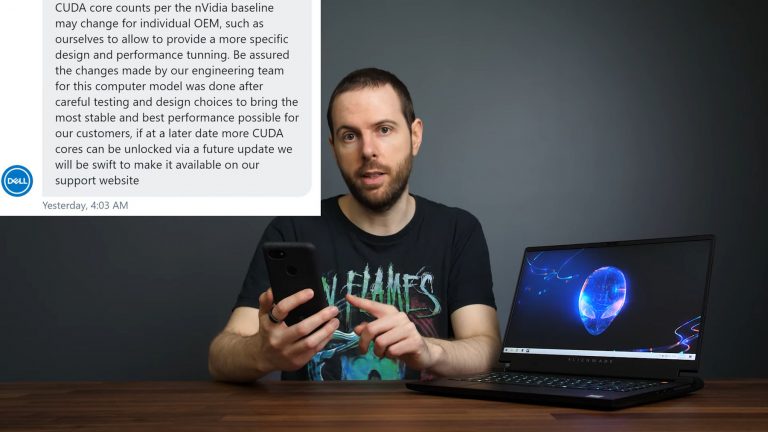 Update: Tom’s Hardware has reached out to Dell for clarification as well. Apparently, it is a mistake that will be fixed by mid-June:

“We have been made aware that an incorrect setting in Alienware’s vBIOS is limiting CUDA Cores on RTX 3070 configurations. This is an error that we are working diligently to correct as soon as possible. We’re expediting a resolution through validation and expect to have this resolved as early as mid-June. In the interim, we do not recommend using a vBios from another Alienware platform to correct this issue. We apologize for any frustration this has caused.”

NVIDIA has taken a hard stance on laptop makers and have them display TGP variants on their product pages. It took many months though, but most notebook brands are now displaying detailed information on both the TGP and clock speeds.

Dell Alienware division appears to be an exception though. In fact, not once in the product description, Dell reveals the true specification of the RTX 3070 graphics card installed in the system. There are is no information on clock speeds or TGP being used by the system. Not to mention the disabled CUDA core count.

The graphics card in the Alienware system offers the worst performance out of seven tested by Jarrod’s Tech. 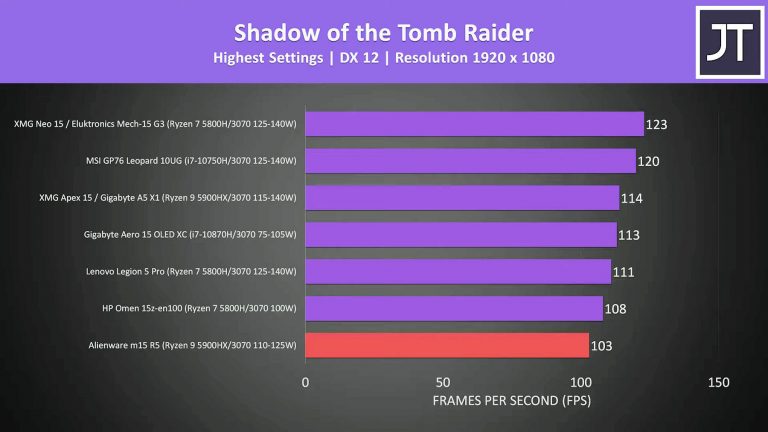 The graphics card in this system has 4608 CUDA cores instead of 5120, which are official NVIDIA specifications. The GPU maker does not even list RTX3070 with 4608 cores as an option. 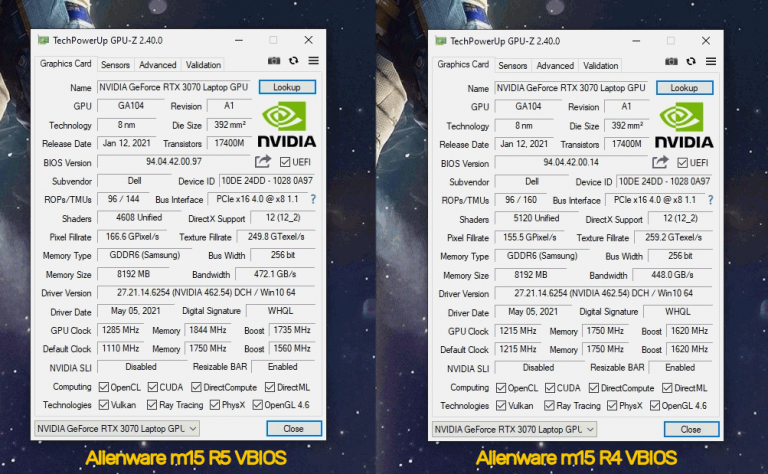 The decision to intentionally disable CUDA cores on RTX 3070 Laptop GPU by Dell may raise a lof questions, considering that no such ‘feature’ is to be found in Alienware m15 R4 and upcoming R6 laptop (at least not to our knowledge). Both the R4 and R6 are Intel-based systems.