NVIDIA’s board partners are adding more Ampere graphics cards to their website.

Earlier this month NVIDIA announced that the launch of its GeForce RTX 3070 graphics card is now postponed to October 28th. The reviews should already be here, and first customers should be showing off their cards on social media. That is sadly not the case.

We have already reported that Danish e-tailer published how many RTX 3070 graphics cards were ordered from manufacturers and how many have already shipped. On October 7th Proshop reported on 20 units already in its warehouse. The situation is not much better 12 days later. According to the last (today’s) report the seller already received 106 units with more confirmed on the way (140). Which is still a lot less than ordered from factories (4,280).

The good news is that the Chinese National Day Golden Week holiday is over so the shipment from Chinese factories should increase this week. However, it does not seem like RTX 3070 will see a lot better availability than GeForce RTX 3090 and RTX 3080 at launch.

One thing is clear, customers who are looking for a 500 USD graphics cards right now, should equip themselves with patience. Those who are out of patience should also consider the fact that just one day before the launch of the RTX 3070 series AMD will be holding a press conference revealing its Radeon RX 6000 series featuring Big Navi graphics processor. AMD is more than likely to showcase a competitor at a 500 USD price tag. Unfortunately, there is no information on RX 6000 series availability yet. 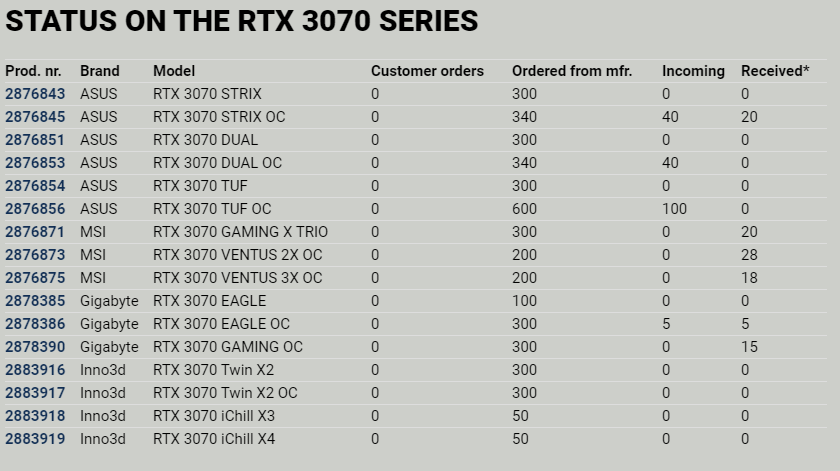