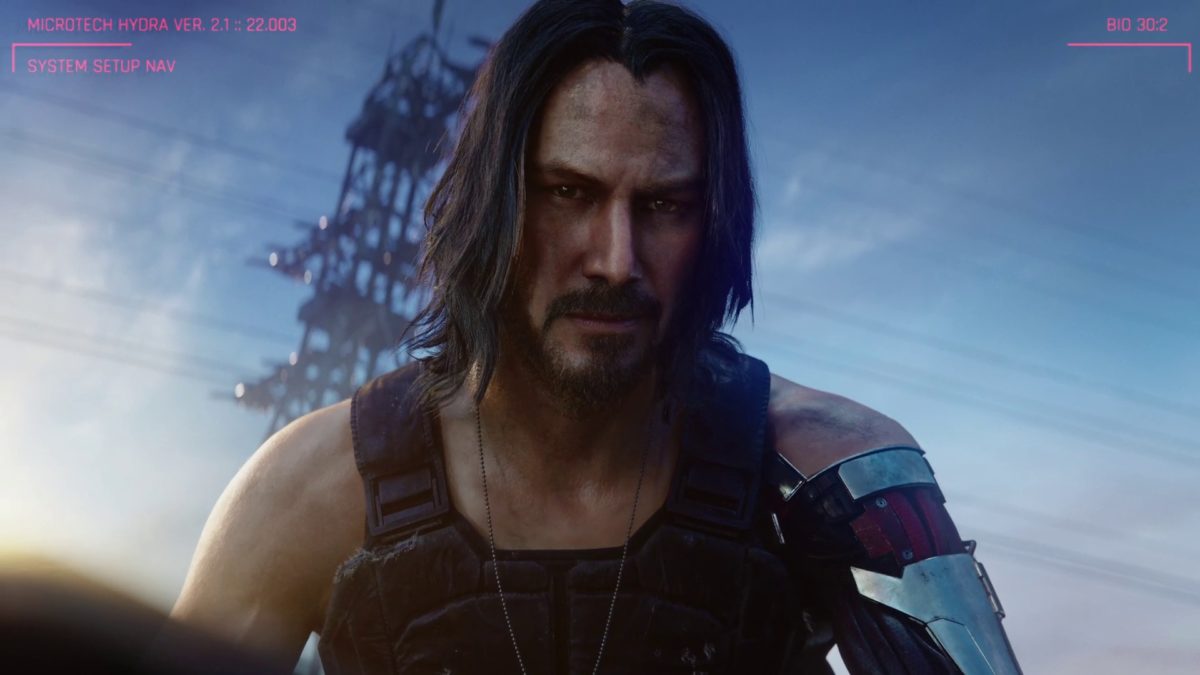 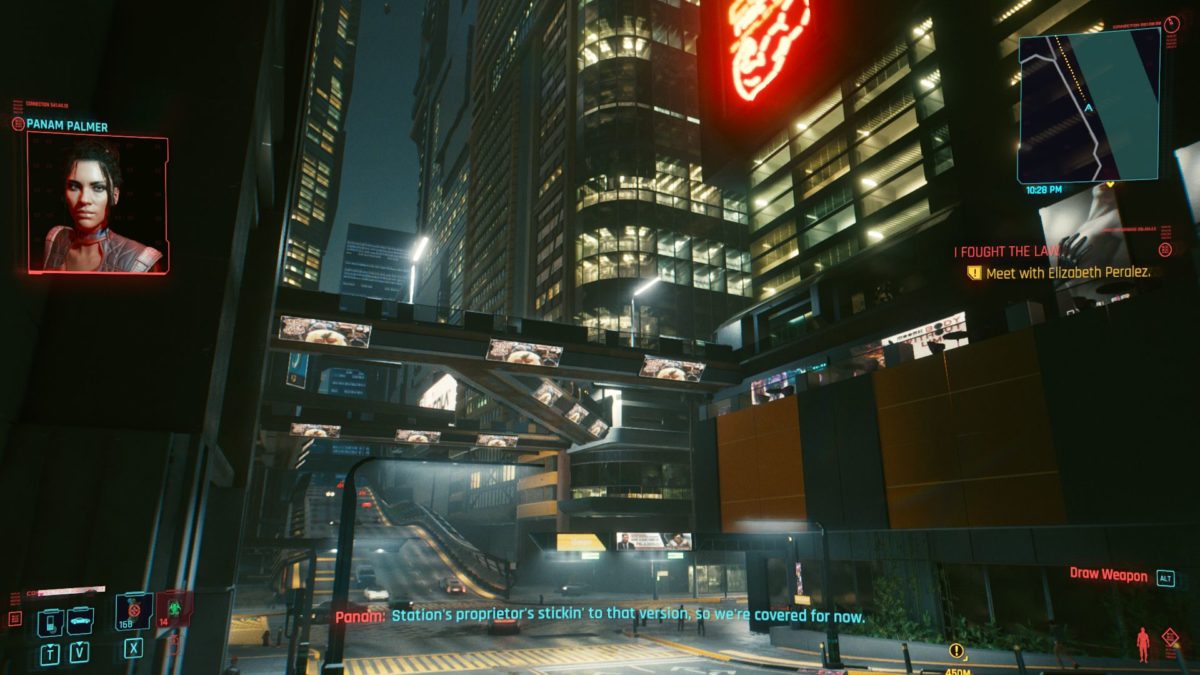 An article from Tom’s Hardware covers the GPU performance of the latest RPG/FPS game from CD Projekt Red, Cyberpunk 2077. The game is officially set to launch on December 10th, but today the developer lifts the embargo on the game reviews.

Cyberpunk 2077 features both ray tracing and super-resolution technologies. When it comes to the latter, only NVIDIA DLSS (Deep Learning Super Sampling) is available, as AMD has not yet released its FidelityFX Super-Resolution for any game. Ray tracing is only supported by NVIDIA RTX graphics cards at launch, but the support for Radeon RX 6000 is also coming in the future. The game features various options for DLSS, but the default settings are: quality for 1080p resolution, balanced mode at 1440p, and performance mode at 4K.

Tom’s Hardware testing platform features Intel Core i9-9900K CPU with individual tests featuring now ancient quad-core Core i7-7700K processor. Do note that the version tested by Tom’s Hardware has Denuvo enabled, which could impact the performance. A GOG Galaxy version of the game will be released without DRM, which may have an impact on GPU and CPU performance.

Since there are many settings, Tom’s Hardware charts may be slightly confusing at first, because there are many different graphics settings in the game, so here’s a quick legend:

Cyberpunk 2077 appears to be CPU-limited at 1080p and 1440p resolutions. There also appears to be a 104-108 FPS wall that cannot be broken by any graphics card in this review. At 1080p the Radeon RX 6800XT offers the best performance, but once the resolution is cranked up to 4K, NVIDIA GPUs have a clear advantage: 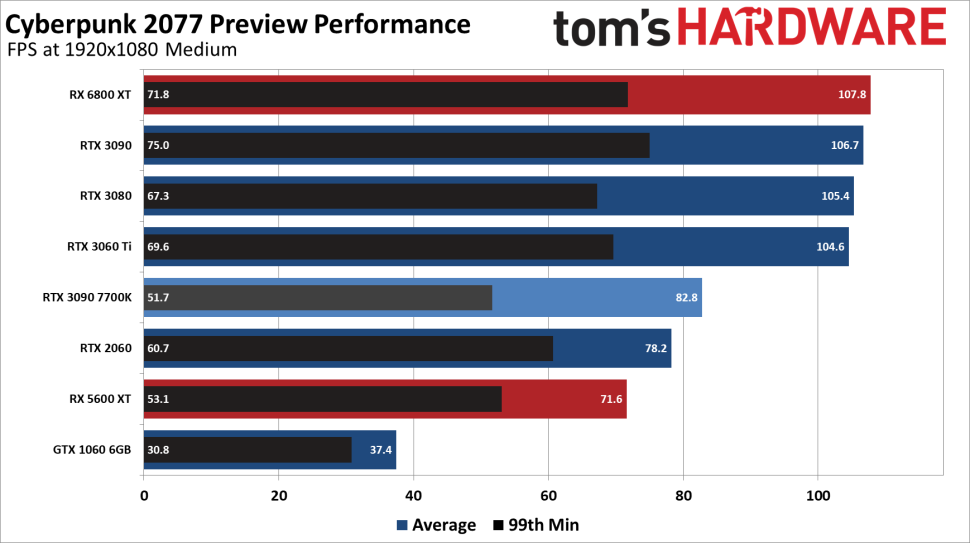 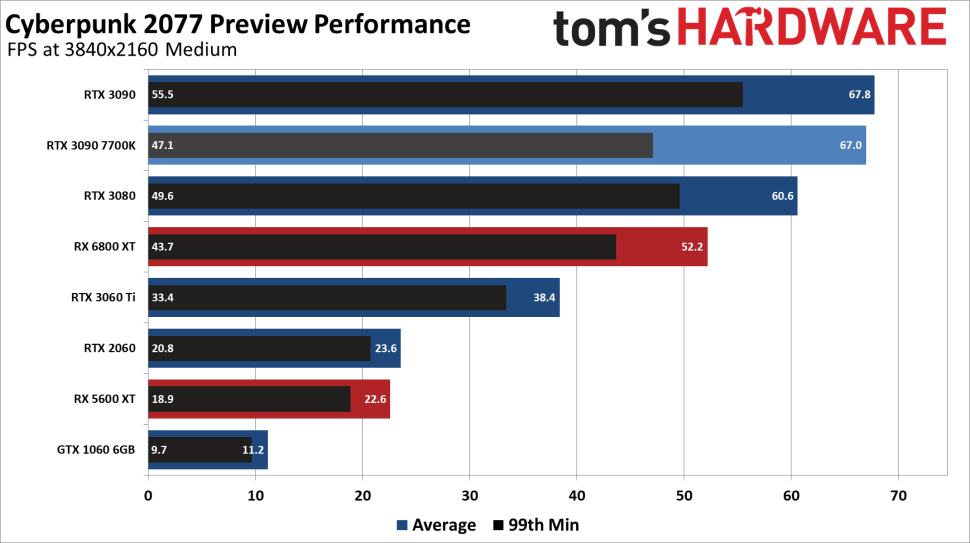 Those who were already able to purchase Radeon RX 6000 graphics or NVIDIA GeForce RTX 30 cards are likely to use higher resolutions, and if possible, benefit visually from ray tracing with DLSS enabled. At launch, only NVIDIA GPU supports both. AMD RX 6000 cards should receive ray tracing support later.

At 4K resolution, none of the graphics cards is capable of delivering 60 FPS with Ultra preset. In this rasterization test without ray tracing or DLSS, the GeForce RTX 3090 appears to be 36% faster than Radeon RX 6800 XT. The RTX 3090 with Ray Tracing set to Medium is simply unplayable at 26.7 FPS, this is of course, without DLSS enabled. 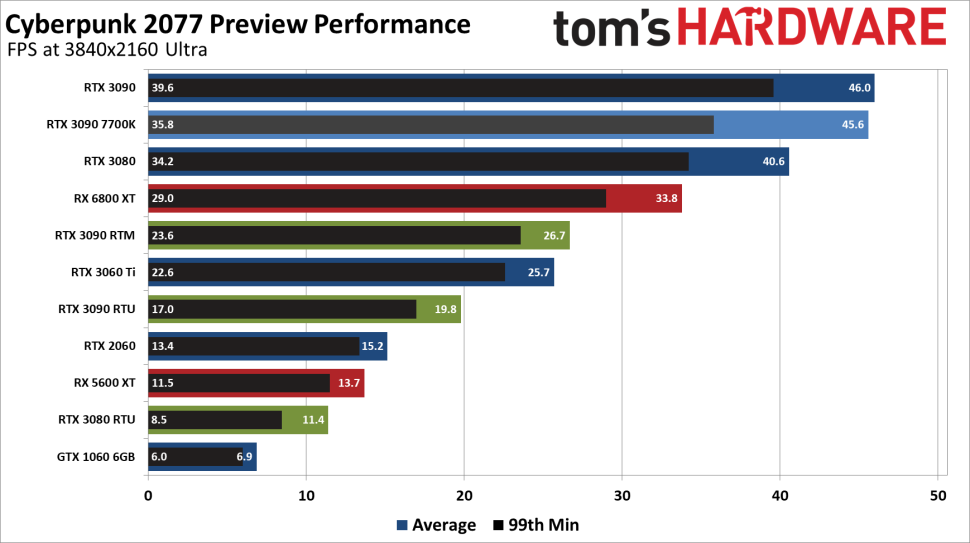 The various DLSS settings have been comprehensively tested by Tom’s Hardware. It is revealed that with Ray Tracing set to Ultra, only RTX 3090 is able to break the 60+ FPS barrier with DLSS set to Ultra Performance quality.

AMD Radeon RX 6800 XT is not included in this chart since it does not support any of the two technologies. 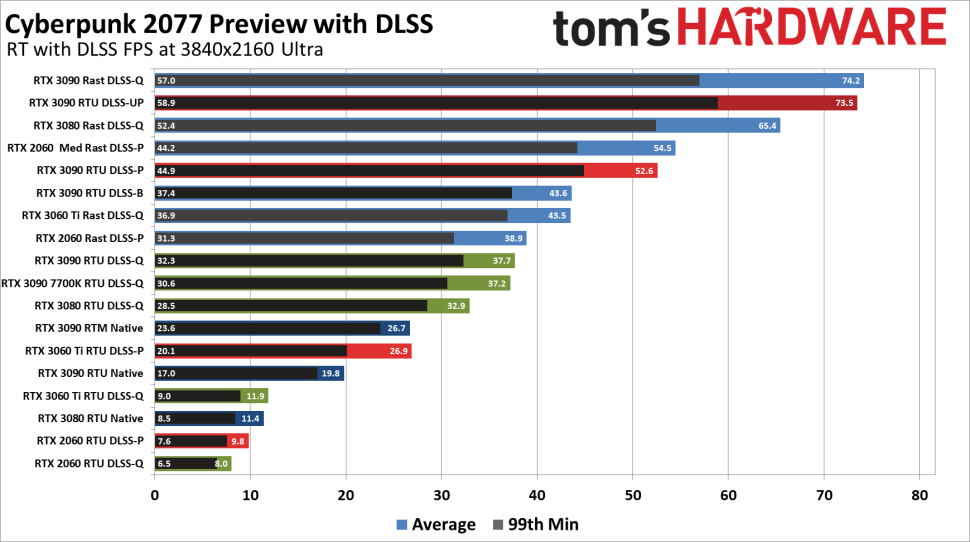 There are more charts available in the original article which we encourage you to check. The game is already available for preload on Steam. NVIDIA launch drivers will also be available when the game is released, while the reviewer is using a pre-launch graphics driver. Tom’s Hardware will be redoing their test with the DRM-free version and updated AMD and NVIDIA GPU drivers at some point in the future.