We have been notified about the first listing of the upcoming RTX 3090 Ti pricing.

The card has already been listed by distributors and some retailers. So far we only have pricing for MSI RTX 3090 Ti cards from two Swiss retailers and a single German (speaking?) distributor. The pricing is actually much higher than we expected, going for 3654 up to 4497 USD after conversion. Do note, however, that those could naturally be early placeholding prices:

One of the screenshots shows the pricing of the already available RTX 3090 card from ZOTAC, with a price of 2390 EUR. This means that the cheapest RTX 3090 Ti from the same distributors is listed at a 30% higher price: 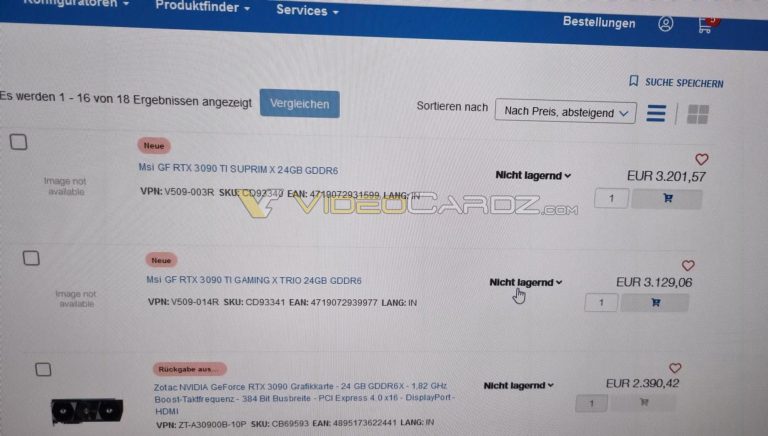 The most recent news is that RTX 3090 Ti encountered some manufacturing issues, which are now being investigated by NVIDIA. The company has requested all board partners to temporarily halt their production of custom cards till the problem is fully resolved. At the same time, NVIDIA pushed back the full reveal embargo which was set for this week but has thus far not provided a new date. This date covers the announcement of custom models, such as the MSI’s RTX 3090 Ti series.