Here’s a reminder that NVIDIA RTX 4090 GPU, the flagship SKU from the new “Ada” series has official MSRP in Europe at 1949 EUR. NVIDIA no longer price matches USD to EUR, which was the case before when euro was higher valued. NVIDIA is now adding sales tax (VAT) to European prices, which means around 20% higher compared to US MSRP.

Over at Spanish CoolMod website, there are first RTX 4090 GPUs now listed without preorder option. Interestingly, this is the first store to list prices in euro for non-Founders Edition GPUs. The prices match what was announced that companies will offer non-overclocked SKUs at NVIDIA MSRP, in this case that’s GALAX/KFA2 SG and ZOTAC Trinity non-OC GPUs.

Interestingly, the KFA2 RTX 4090 Serious Gaming ST (lower-clocked) has a price even lower than MSRP at 1900 EUR. This does not appear to be a mistake because this store has all the official marketing materials from KFA2. This is also one of the biggest stores in Spanish selling PC components. That said, this appears to be a real price.

Update: That didn’t take long, the price has been adjusted to 2100 EUR: 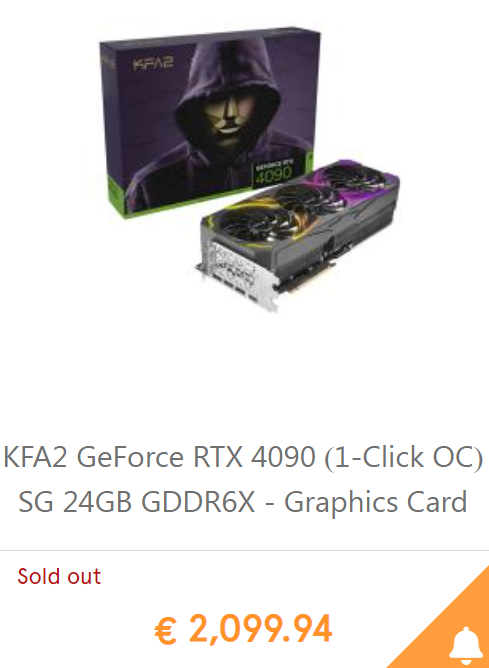