AMD FSR much sooner than expected?

According to Coreteks, a YouTuber who has leaked AMD content in the past, AMD FSR technology is already in developers’ hands and it should launch very soon.

Coreteks claims that AMD FSR has already been distributed to game developers. This information has been confirmed by the YouTuber with a least with a few developers, including a smaller studio. There are still some questions on now AMD is going to implement the final version of FSR, as there seems to be a difference between the versions being distributed to game developers. For that reason, Coreteks is unable to provide clear information on possible performance uplift coming from the technology. 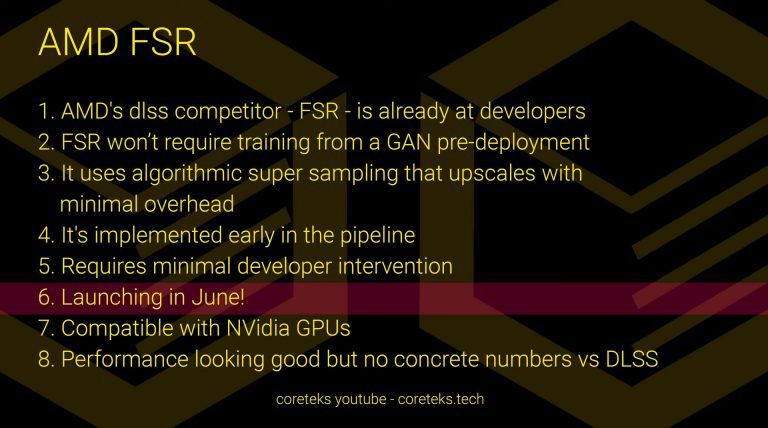 Unlike NVIDIA DLSS which is being used at the very end of the graphics pipeline, AMD FSR would be engaged much sooner. This technology would therefore require less work from game developers and no AI training. This would greatly speed up the adoption and implementation of the technology.

The most interesting part of the video is the claim that AMD FSR would allegedly launch in June. So far we have not heard anything that would confirm this claim, but it is certainly much sooner than we expected. Back in March, Scott Herkelman (CVP and GM at AMD Radeon) has said that AMD will launch FSR in the year, without any specifics on a more accurate launch date. This has obviously led us to believe that AMD is unable to give any estimates as the technology is still far from being ready.

AMD FSR is officially part of the FidelityFX toolkit, which means it will be officially supported by AMD GPUs. Yet, Coreteks claims that FSR would be compatible with NVIDIA GPUs, which is quite surprising, to say the least. While it may work in its current state, it does not mean that AMD will allow NVIDIA GPUs to benefit from the technology. After all, the manufacturer has no reason to boost performance on competitor’s GPUs.