NVIDIA to announce and release RTX 3090 Ti on March 29th

We have finally confirmed the launch date of NVIDIA flagship GPU.

The rumor from Chiphell forums was true. NVIDIA is now planning to introduce and launch its RTX 3090 Ti SKU on March 29th. In fact, product reviews, including custom models, will also be published on the same day.

NVIDIA shared new embargo information to its boards partners, including the final dates for submission of the press releases (for NVIDIA to approve) and review seeding list. Those should be fulfilled between 3rd and 4th week of March.

The company has not provided any explanation for the graphics card’s delay since its original launch date of January 27th. Off the record, it is said that there were problems with the 2 GB GDDR6X memory that were discovered right before the cards were supposed to ship to reviewers. 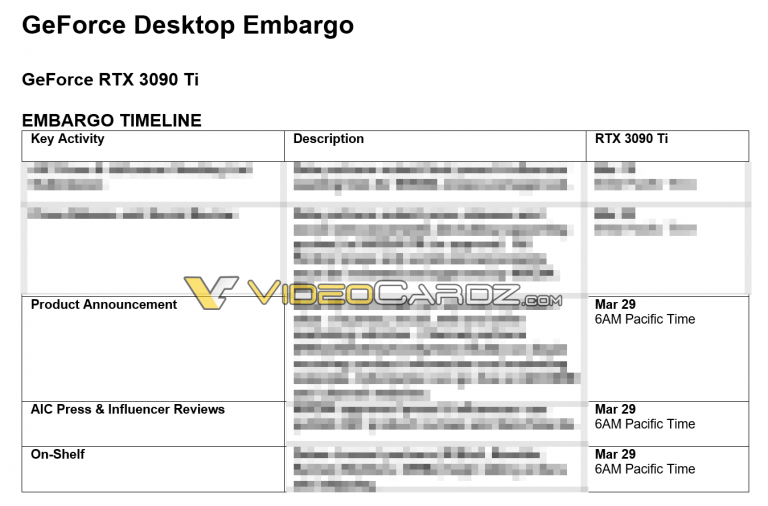 NVIDIA GeForce RTX 3090 Ti will feature GA102-350 GPU with 10752 CUDA cores, a full configuration for this GPU. This model is to be NVIDIA’s first with 21 Gbps GDDR6X with a maximum bandwidth exceeding 1 TB/s. The RTX 3090 Ti is also expected to be the first graphics card to feature a 16-pin PCIe Gen5 power connector and require as much as 450W of power.

Board partners are currently awaiting official price information while they prepare review samples to ship in the next 2 weeks.