Commodore 64 modded to mine Bitcoin

Commodore 64 can mine bitcoin, but it’s slooow

A video game programmer and collector of retro computer “8-Bit Show And Tell” has modified his Commodore 64 to mine Bitcoins.

Will bitcoin mining on Commodore 64 finally put graphics cards and ASIC miners to the rest? Probably not, but the fact that it is actually possible to modify a console to perform such a task is quite remarkable.

Commodore 64 was released in 1982 by CBM. It features MOS Technology 6510 processor which has a frequency of 1.023 MHz. The console is equipped with 64KB of RAM and 20KB of ROM. At the time probably no one would have expected that this setup would ever be used to mine blockchain-based cryptocurrency, but this is actually what happens in the video attached later in this post. 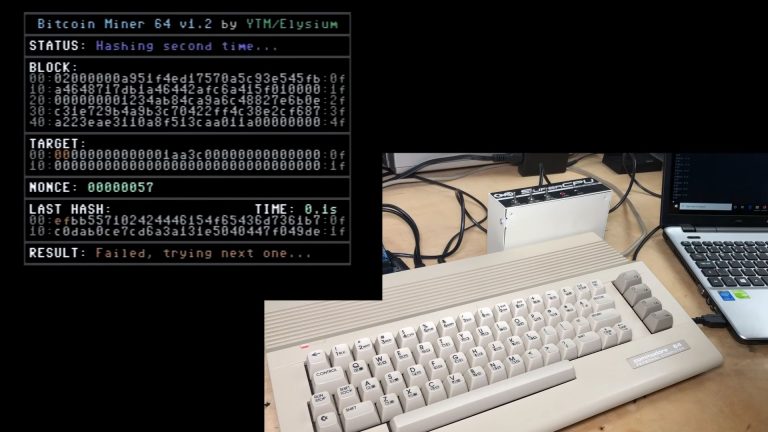 This is not the first attempt to retrofit old consoles to mine cryptocurrency. Last month we reported on a custom Nintendo GameBoy that was modified to mine Bitcoin. This video actually inspired the modder to do a similar thing to Commodore 64, an even older piece of hardware.

The hashing performance of Commodore 64 is around 0.3 h/s, but as the author says the code written in C programming language, not pure machine language which could possibly provide a 10x performance boost, the modder claims. The Commodore can be upgraded with an add-in card called SuperCPU which increases the performance further by 20x, this was also verified by the modder. Unfortunately, even with speed increased, it is nowhere near as efficient as modern ASIC miners can reach up to 18 terahash/s.