Iris Xe MAX is no longer just a mobile chip

A Chinese company GUNNIR has recently updated its website to list a new model called Iris Xe Index V2. This card features the full DG1 chip, which was thus far only available to laptops.

Intel ARC Alchemist series based on the DG2 GPU family might not be here yet, but the deployment of its successor (DG1) has been somewhat successful. The DG1 GPUs were initially only available to software developers but in the end, they have made their way into the discrete DIY desktop market under the Iris Xe brand.

Intel developed two DG1 SKUs: Iris Xe and Iris Xe Max, the latter featuring the full implementation of the silicon exclusively available for laptops. This is no longer true though, as GUNNIR is now selling Iris Xe Max Index V2 graphics card with 96 Execution Units (up from 80 available with Iris Xe non-MAX).

The company offers as many as three variants of DG1 based cards, which are now all listed on Taobao with the following pricing:

The Max Index V2 model features 96 EUs (768 shading units) and a higher boost clock of 1.65 GHz. Despite this change, the power limit of 25-41W has not changed compared to the non-MAX model. 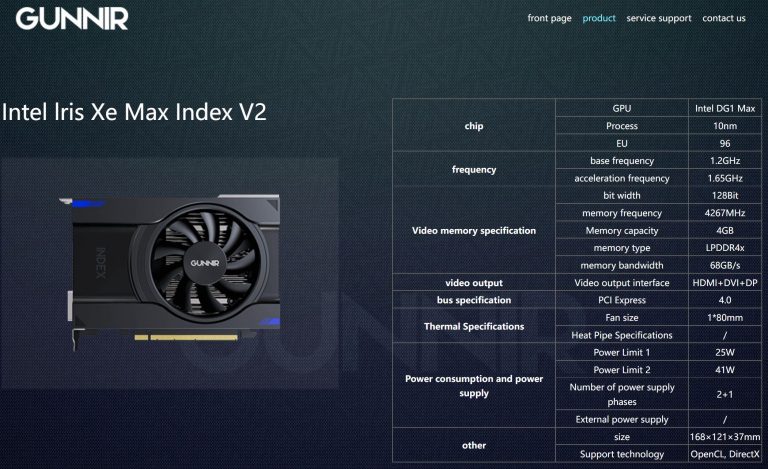 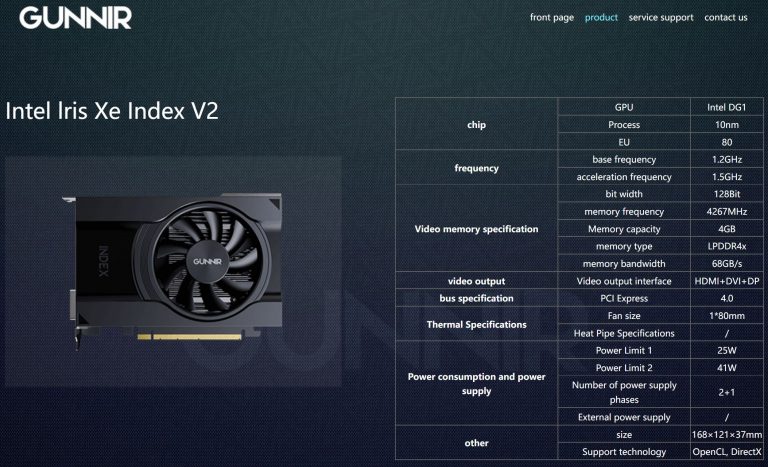 It should be noted that Irix Xe graphics cards will not work with all systems. There is no support for any AMD platform, and Intel support is limited only to the Coffee/Comet Lake series (9th Gen and 10th Gen). The Iris Xe models are compatible with Intel B460, B365, and H310C motherboards.

The Iris Xe series can therefore be treated as a predecessor to the Arc A300 series, supposedly based on DG2-128EU GPU. A smaller 6nm fabrication node, higher clock speeds, and higher TDP should provide a significant performance uplift to Intel’s entry-level desktop GPU segment.