Intel Arc dGPU launch was not the only important event today. In China, the first fully domestic graphics architecture has just been presented.

Moore Threads has only been established 18 months ago. In 2021 the company announced it is developing a fully featured graphics processor. To say the least, it was hard to believe that such a young company would achieve what many companies were unable to do for years – to bring their own GPU to the market in such a short time.

The company is led by Zhang Jianzhong, who is a former global vice president and general manager for NVIDIA. With this 15 years of experience in the graphics market and a very good support from experienced team and partners, his company today presented its first graphics cards for gaming and servers.

Moore Threads today revealed its MTT S60 and MTS2000 desktop GPUs. Those are made in 12 nm process technology and are designed using MUSA (MT Unified System Architecture). According to the company, the S60 offers 6 TFLOPs of power while S2000 is 12 TFLOPS. The former is equipped with 8GB of LPGDDR4X memory, while the latter feature 32 GB of undisclosed memory type.

The most important news from the conference is that the MUSA architecture supports DirectX Runtime, a feature that was missing from all previously announced and demoed Chinese GPUs. Furthermore, MUSA supports OpenCL, OpenGL, Vulkan and even NVIDIA CUDA.

What is also interesting that today Intel has launched its Arc DG2 GPUs as the first consumer GPUs with AV1 encoding capability. As it turns out, MUSA GPUs also have support encoding and decoding in this format:

The graphics card was demoed in a League of Legends game at 1080p resolutions. Unfortunately, no further details were discussed. It should be commented upon that the game is not very demanding, it can be run even with DX10 capable GPU. The game’s official recommended specs list GeForce GTX 560 or Radeon HD 6950. 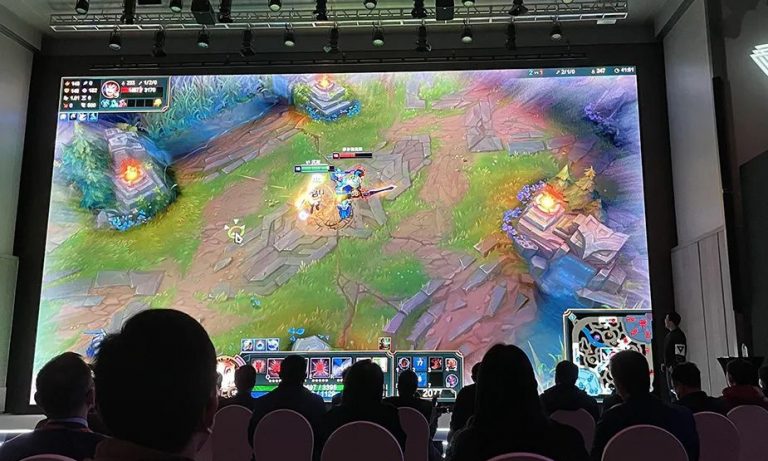 The MTT S2000 leverages the AlphaCore physics simulation technology. It is said to improve physics performance by 5 to 10 times, the company claims. It is supported by multiple platforms such as Vulkan, CUDA or DirectX. Likewise, it is also designed to work with game engines and design software such as Houdini, Unreal Engine, Unity or D5.