An Undisclosed Canadian retailer now lists GeForce RTX 3090 Ti TUF Gaming OC and ROG STRIX LC at a very high price. The TUF model has a price tag of 4,649 CAD (3,683 USD) while the STRIX might cost 5,234 CAD (4,148 USD). This information has been shared by reliable leaker @momomo_us.

It should be noted, however, that those are not the first pricing leaks on the upcoming RTX 3090 Ti from ASUS.  More than a month ago, there has been a leak featuring European pricing with even more models. ASUS is also expected to launch an air-cooled ROG STRIX OC model, while the LC will be a liquid-cooled edition. The only card that has been leaked thus far though is the TUF Gaming (pictured above). 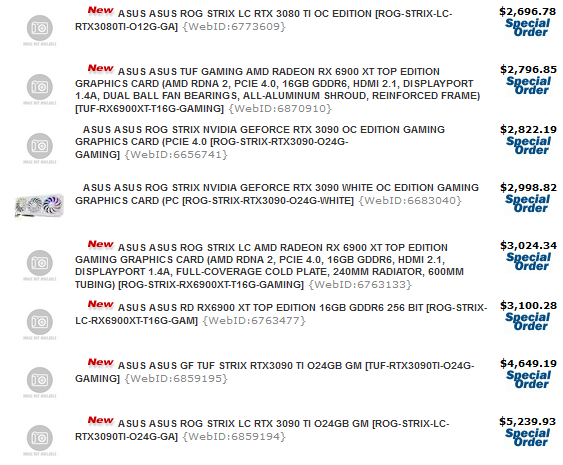 The launch of this card has been delayed till late March. The current information suggests it will launch on March 29th, which is also the date retailers will officially start selling this model, as well as the end of the review embargo.

The RTX 3090 Ti is the upcoming flagship NVIDIA Ampere GPU equipped with full GA102 GPU (10752 CUDA cores). NVIDIA was forced to postpone the launch due to problems related to the memory that this card is using. The RTX 3090 Ti is the first graphics card to feature 2 GB GDDR6X modules rated at 21 Gbps. Furthermore, it will also feature a new standardized power connector with a total of 16 pins. Potential users will need to ensure that their power supplies can feed 450W to the GPU alone, which might be a domain of 1000W supplies, especially when attached to other high-end desktop components.