Update on January 5th, 2022. Unfortunately Aya Neo Next does not feature Rembrandt APU but Cezanne.

Just a few days ago AyaNeo confirmed it will be showcasing its new console on December 28th. However, this date is no longer on the table, as the company had to reschedule its plans to align with the AMD product announcement.

We speculated that the December 28th reveal could suggest that AyaNeo Next is not based on Rembrandt, simply because it has not yet been announced by AMD. The formal introduction of Rembrandt is now set for January 4th, which is the time when AMD holds its press conference hosted by Dr. Lisa Su. It is unclear why has AyaNeo rescheduled its announcement, but it definitely does not seem that the change happened at the very last minute, as Rembrandt requires a new socket and supports new memory technology. It might have been a miscommunication between both companies, or more likely, a decision to reveal the full specs rather than just a teaser.

For certain reasons, the Ayaneo event we planned on 28 Dec is rescheduled to 21:30, 4 Jan 2022 EST.
We apologize for the wait and invite you to join us on YouTube (https://t.co/5hnKlb02be), and meet the next generation gaming handheld – Ayaneo NEXT.

By offering Ryzen 6000 series APU, AyaNeo Next will be very competitive against its main competitor, which is Steam Deck. The gaming console from Valve is based on a 4-core Van Gogh/Aerith APU with Zen2 and RDNA2 architectures. While it is unclear how many CPU cores or Compute Units would the AyaNeo SoC have, there is a good chance it will be more powerful, as Rembrandt U-Series is 15W TDP by default, whereas Van Gogh is 4-15W.

AMD Rembrandt is also to offer up to 12 Compute Units, whereas Aerith is limited to 8. Not only that, the GPU performance is likely to be much higher due to increased clock speed, typically 2GHz for this APU segment (RDNA2 might go higher). 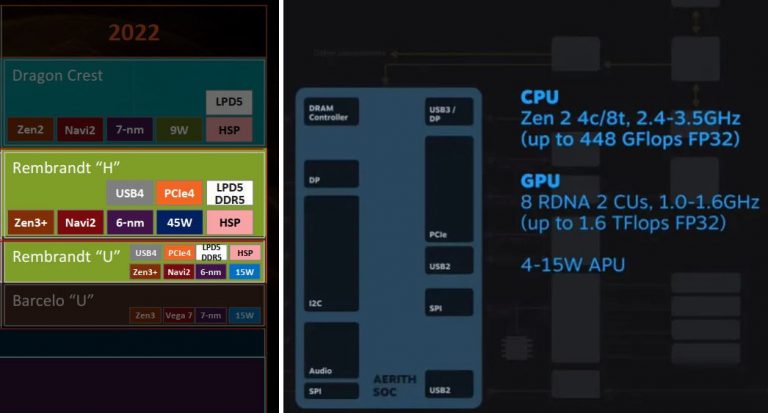 The key to success will be through pricing and software stack. Valve is tirelessly working to integrate Steam Deck into its ecosystem, whereas AyaNeo relies on the existing platforms. Aya consoles are also far from being affordable with pricing going up to 1300 USD, so twice as expensive as Steam Deck.