Handheld gaming console from AYANEO to take gaming performance to a next level.

Could NEXT II be the first gaming handheld console to feature Radeon 7000 GPU? The company is now claiming that their upcoming console will feature Ryzen 7000 processors and ‘new’ discrete graphics.

The CPU upgrade is advertised as ‘next-gen’ suggesting that we might see first Zen4 APU in such a product. However, it is worth noting that the 7000 series feature not only Zen4, but also Zen3, Zen3+ and Zen2 microarchitecture. In this case, the wording may be very important.

More importantly, the tweet confirms that the console would feature discrete graphics. It is unlikely for a company to mistake discrete with integrated GPU, such as Phoenix APU with Zen4/RDNA3 graphics, so this could be the just announced Radeon RX 7600S with 28 Compute Units. This GPU operates within 50 to 70W, which is not something we expect from such a small device. 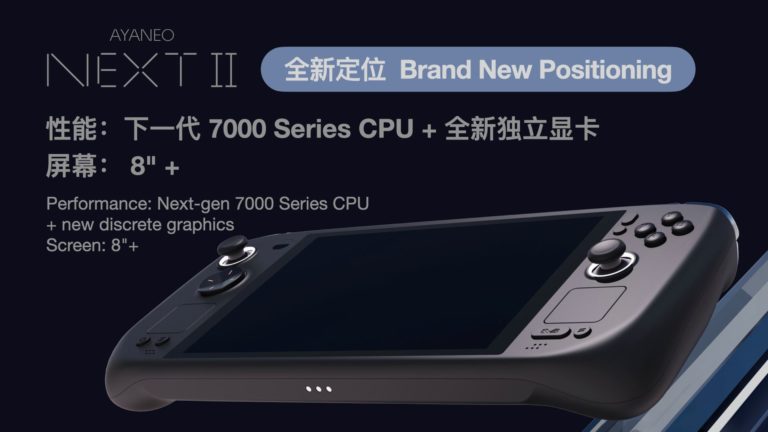 AYANEO is either not confirming the name of the GPU, either because AMD is yet to announce this product, or because the company is still exploring options.

According to the tweet, the NEXT II or NEXT 2 console will be announced soon. The company shows off its KUN model in black color scheme. This model features an 8-inch screen.

Exciting news that there will be NEXT II and KUN in 2023 !!
NEXT 2 brand new positioning and will have Next-gen 7000 Series CPU, new discrete graphics and 8" screen
A new series of handhelds carrying the spirit of exploration of NEXT 2 will be announced soon, this is AYANEO KUN pic.twitter.com/emQaqK1VpZ