The company will work with government agencies to begin the recall process of the motherboards affected by the design flaw.

Buildzoid was right. ASUS has now officially confirmed that some Z690 Hero motherboards have indeed an incorrectly installed capacitor around the memory. This is why some users might see a mysterious 53 debug code which means that the memory is not being detected. This wouldn’t be a huge problem as the warranty covers such issues, but in extreme cases, Hero motherboards would actually start to catch fire.

Interestingly, the YouTuber managed to find determine the reason for the Z690 Hero problems simply by looking at the pictures shared by users and by comparing them to working samples.

Those findings have now been confirmed by ASUS, who published an official statement over at their Facebook account. Users are asked to verify if their motherboards are affected by the production flaw by comparing their product code. The company will work with government agencies to start a replacement program.

“To our valued ASUS Customers, ASUS is committed to producing the highest quality products and we take every incident report from our valued customers very seriously. We have recently received incident reports regarding the ROG Maximus Z690 Hero motherboard. In our ongoing investigation, we have preliminarily identified a potential reversed memory capacitor issue in the production process from one of the production lines that may cause debug error code 53, no post, or motherboard components damage. The issue potentially affects units manufactured in 2021 with the part number 90MB18E0-MVAAY0 and serial number starting with MA, MB, or MC.

You can identify your part number by referring to the product packaging: 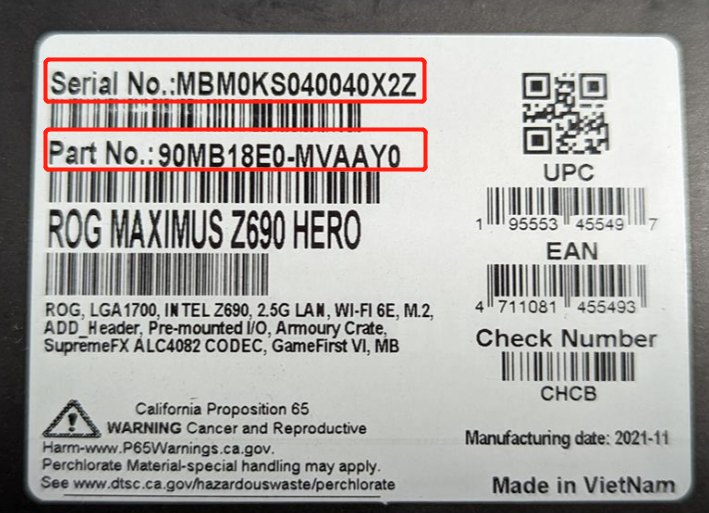 As of December 28, 2021, there have been a few incidents reported in North America. Going forward, we are continuing our thorough inspection with our suppliers and customers to identify all possible affected ROG Maximus Z690 Hero motherboards in the market and will be working with relevant government agencies on a replacement program. Thank you so much to everyone for your patience and support while we are working through the replacement program.

If you have any questions or concerns please feel free to contact ASUS customer service. Best regards, The ASUS Team.”