ASUS to introduce Dynamic OC Switcher for all ROG AM5 motherboards

Dynamic OC Switcher for all ROG AM5 motherboards

Yesterday at Gamescom ASUS announced its first Micro-ATX and Mini-ITX series for AM5 socket. The company also revealed “Dynamic OC Switcher” technology that will work with all ROG motherboards for Ryzen 7000 series.

Dynamic OC Switcher will be implemented into all AM5 motherboards for Ryzen 7000 series, but only from the ROG series. This feature already exists in premium AM4 motherboards such as Crosshair VIII Dark Hero or Extreme with X570 chipset. 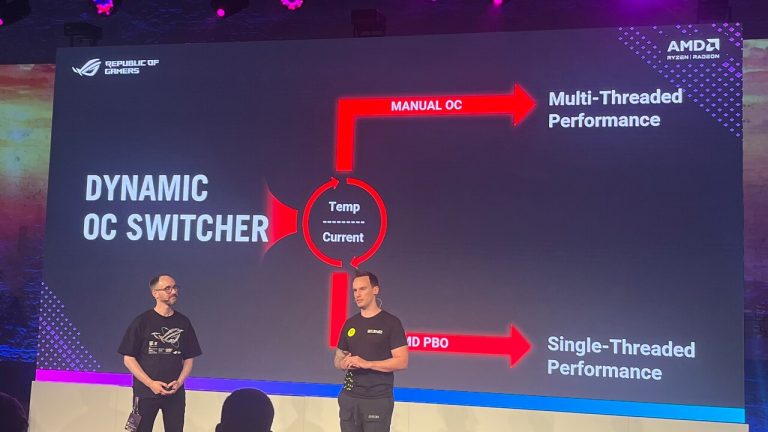 What OC Switcher allows is to manually optimize the maximum single and multicore turbo frequencies. This functionality is limited with AMD PBO (Precision Boost) technology, which only allows boost single core turbo while the remaining cores are clocked much lower.

As the name suggest, Dynamic OC switcher will perform switching between manual OC and AMD PBO modes dynamically depending on parameters such as current CPU voltage or current CPU temperature.

All these features will be available for ASUS ROG motherboards including X670E, X670 and B650 chipsets. AMD is set to launch the Ryzen 7000 series in September, but the official announcement is now planned for next Monday.