According to the fresh filing to EEC (Eurasian Economic Commission regulatory office), ASUS will be substantially extending its portfolio of NVIDIA graphics cards.

We usually see EEC updates to be focusing around one or two SKUs, but this is probably the first time we see one board partner refresh its whole lineup of graphics cards. More than one hundred graphics cards were added to EEC featuring yet unreleased RTX 3080 Ti and RTX 3070 Ti models, but also refreshed LHR (Lite Hash Rate) series and Cryptomining Processor (CMP HX) models.

The EEC filing reveals that ASUS will be launching all ROG STRIX variants with RTX 3080 Ti model, including water-cooled ROG STIRX LC series, an anime-inspired GUNDAM series, as well as ROG STRIX WHITE and its traditional ROG STRIX series. Some listings feature as many as three sub-variants for each series, including OC, Advanced and non-OC models.

The RTX 3070 Ti is only getting the black and silver ROG STRIX models, but it will also be available under EK (with preinstalled EK water block), TUF, and TURBO (with blower-type cooler). 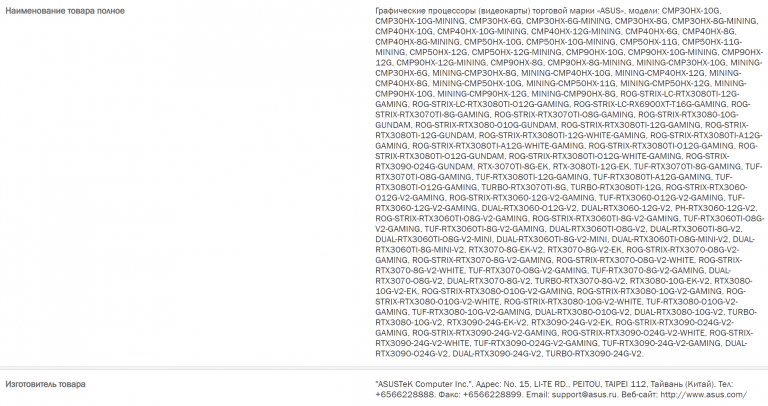 Additionally, we have a long list of V2 models, which are more than likely ASUS LHR series. Interestingly the list also features RTX 3090 graphics cards, which are not officially getting the LHR treatment, but this might suggest that they would in the future. Apart from that RTX 3080, RTX 3070, RTX 3060 Ti, and RTX 3060 are all getting new V2 SKUs. Some less popular (or more precisely harder to obtain) models are not listed here, such as ROG STIRX WHITE or GUNDAM, which suggests those will be now exclusive to the GA102 Ti series.

Finally, we have a list of CMP models for cryptocurrency mining. We have already seen the ASUS CMP 30HX model, but only now it has been listed at EEC. What might be interesting is that ASUS expects different memory variants of each CMP card. This has not been confirmed by NVIDIA yet, but it may suggest that NVIDIA will be expanding the list of CMP 30HX models, which would offer a similar hash rate, but different memory capacity.