While some retailers, such as BestBuy, simply list the pricing for the upcoming models, others like Newegg do not allow such an option. There is, however, a trick that allows users to verify the price before it is officially unveiled.

By manipulating pricing filters, only the graphics cards in the range will be displayed. Thus, it is possible to determine the price of these cards simply by adjusting the ranges. Redditor MRizkBV made an effort to find these prices for RTX 3080 cards listed at Newegg. BestBuy also lists some of the upcoming custom cards, hence it is possible to make a comparison of all major brands.

The EVGA’s GeForce RTX 3090 FTW3 Ultra and ASUS GeForce RTX 3090 ROG STRIX OC appear to carry the same price tag of 1,799 USD. This 300 USD  premium price over NVIDIA Founders Edition provides the best performance out of the box from both manufacturers.

Interestingly, these might still not be the fastest models from the brands. ASUS is alleged to be developing the ROG STRIX TOP series of cards (which historically were the fastest), but we also expect the ROG MATRIX series to appear in a matter of few months. Meanwhile, EVGA is developing RTX 3090 KINGPIN, but this card is not meant to offer factory-overclocking, but rather offer the best hardware for extreme overclocking.

Also is it worth noting that both GALAX and MSI have not yet shown their HOF and Lightning series. These cards are certainly going to cost a lot more than Founders Edition. 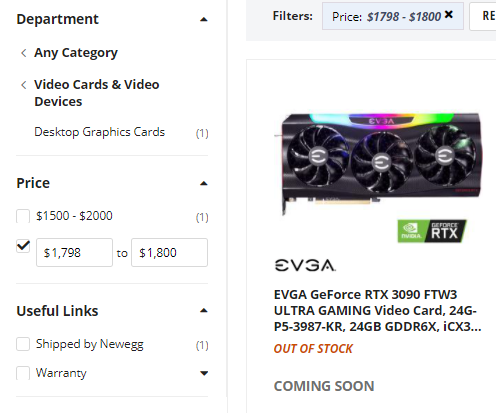