It is no secret that AMD will launch its Radeon RX 6000M laptops graphics cards at Computex. With an exception of the HP Omen series, there haven’t been many leaks on the laptops equipped with these GPUs yet. The only laptop that had already appeared in the leaks is the STRIX G15 from ASUS.

It looks like the hard launch (availability) of RX 6000M laptops should be expected just a week after the Computex announcement. That’s according to Irish retailer Microaid already listing the G15 with Ryzen 9 5900HX and RX 6800M as coming on June 9th with a price of 1950 EUR (2400 EUR with VAT). While the listing does not explicitly confirm the GPU options, it is quite easy to verify by product code that this is indeed the flagship discrete RDNA2 GPU, the RX 6800M. 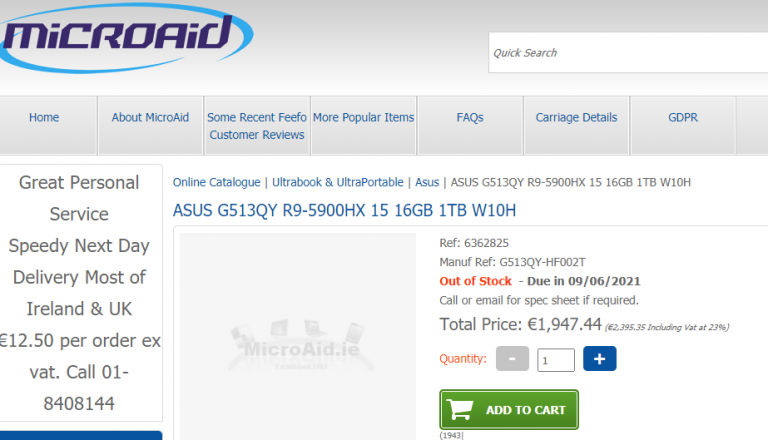 The ROG STRIX G15 is available with various GPU options including, the QY model is the latest with RDNA2 GPU:

So far we have not seen options with RX 6700M or 6600M. It is worth noting though that ASUS also offers Scar 15/17 series with even higher-end GPU options such as RTX 3080 Laptop GPU. There has been no trace of RX 6800M coming to those series though.

Some listings appear to show 16GB GDDR6 memory for RX 6800M, which is obviously incorrect. This graphics card is based on Navi 22 GPU with a 192-bit bus, so only 6GB and 12GB options are to be expected. The RX 6800M is to offer a full-fat GPU with 2560 Stream Processors.

It is expected that AMD will announce five Radeon RX 6000M laptop GPUs at Computex 2021 next week, but the specs still remain to be confirmed.