ASUS is getting ready for the big announcement on March 3rd, where AMD is expected to unveil its latest mid-range graphics card called Radeon RX 6700 XT.

We received two photos of the upcoming models from ASUS.  We were told that ASUS is allegedly preparing 3 custom models and 1 reference design. The photos that we are sharing today reveal the final design of the DUAL and TUF Gaming models.

ASUS RX 6700 XT Dual is a non-factory-overclocked model. Thus, this graphics card may be one of the rumored Navi22-B variants with lowered TGP. The clock speeds were not provided to us, but we can confirm that this model has a 2.7 slot design with a length of 29.7 cm. It will feature 6-pin and 8-pin power connectors, a default configuration of Radeon RX 6700 XT.

The first known triple-fan Navi22 graphics card is TUF Gaming OC. Unlike Dual, this card is likely to feature Navi22-A with higher TGP. The TUF RX 6700 XT is nearly 3-slot and has a length of 32.2 cm. For comparison that’s 5.5 cm longer than the dual-fan reference design. Another key difference from the AMD design is dual 8-pin power connectors. It was previously rumored that the reference design may also feature dual 8-pins (because that’s how it appeared in first leaks), but it was eventually confirmed that it’s actually a combination of 6-pin and 8-pin. The graphics card looks pretty much identical to RX 6800 XT TUF. It seems that the PCB is a bit narrower and the cooler has a different heat pipe layout. 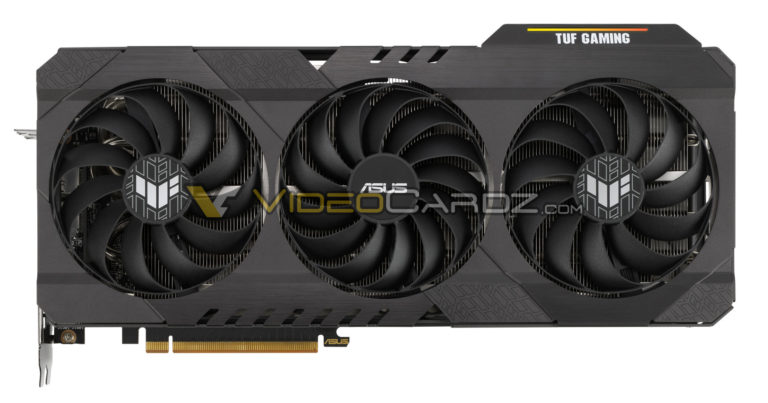