We received a photo from internal testing of the upcoming CMP 40HX graphics card from ASUS. The same source has previously provided the photos of the ASUS CMP 30HX graphics card.

According to the screenshot that we received, the CMP 40HX graphics card from ASUS will offer up to 43.77 MH/s, up from 36 MH/s officially announced by NVIDIA. Those eight mining cards working in a cluster were power-optimized and likely had their memory clock speeds adjusted, so a 21% increase in hash rate is not that surprising.

The CMP 40HX was to launch in the first quarter, but we have not seen yet any AIB model based on Turing TU106-100 GPU that this model was expected to feature. It appears that board partners are still engaged in the testing phase of the CMP 40HX, which in this case simply means mining internally.

ASUS CMP 40HX features 8GB of GDDR6 memory and has a default TDP of 185W.  Judging from the screenshot during internal testing the power of CMP 40HX cards has been reduced to just 135W. This has greatly improving mining efficiency to nearly 400 KH/W. 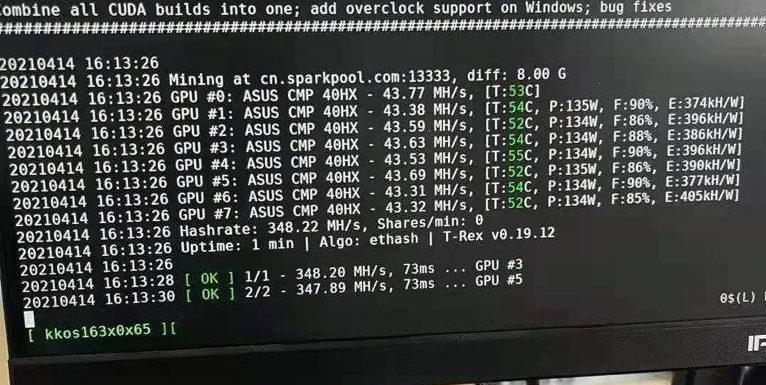 The source has also provided an update on pricing. The ASUS CMP 30HX model was initially planned to cost 799 USD, but ASUS has allegedly revised MSRP for this model to 599 USD. Meanwhile, the CMP 40HX would launch at 699 USD.

Many thanks to DBS CONSTRUCTION for the photo!