We have thus far not heard of any power supply manufacturer actively offering 450W or 600W adapters for their power supplies. Frankly, there is no need as all GeForce RTX 3090 Ti graphics cards come with appropriate adapter. However, should that not be the case, such an adapter or even better a full-spec 16-pin cable are required.

The RTX 3090 Ti is so far the only card that requires such a cable, and the only card that needs 450W of power on its own. Right now, because no PCIe Gen5 power supplies are on sale, this amount of power can only be supplied through a 3×8-pin adapter cables (each with 150W). This is a particularly important thing to remember, once we look at the graphics attached to the promotion from ASUS China. 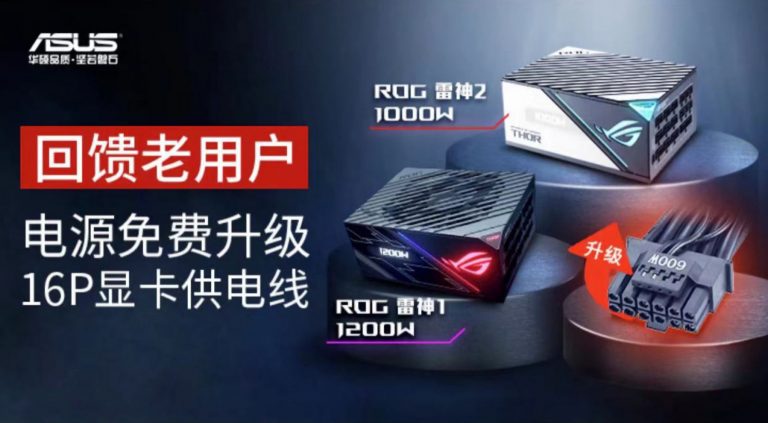 Apparently, the company is giving away through select retailers a 600W 16-pin power cable to ROG Thor I 1200W and Thor II 1000W supplies. This reportedly only applies to recent purchases. The whole thread on Chiphell is a debate whether ASUS actually meant an adapter or a full-spec 600W cable (as the picture suggests). The latter would need to be a 4x8pin adapter and still have some of the data (Sense) pins grounded to unlock 600W power.

According to the most recent information, power supplies equipped with native PCIe Gen5 cable connector will launch in a few weeks time. ASUS is actually developing such supply called ROG Loki. Therefore, gamers considering upgrading to RTX 40 series, should have enough time to pick up a new power supply.