Just a week after AnandTech published their first comprehensive review of the Intel Core i7-11700K “Rocket Lake-S” CPU, another media outlet is ready to share their results. HardwareLuxx also bought the CPU from Mindfactory, a German retailer who decided to put the 11th Gen Core series CPU on sale, despite Intel not even announcing the processor. 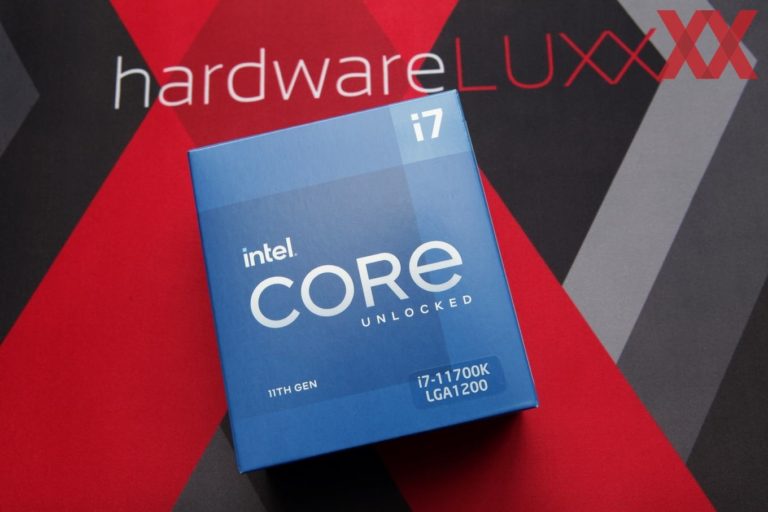 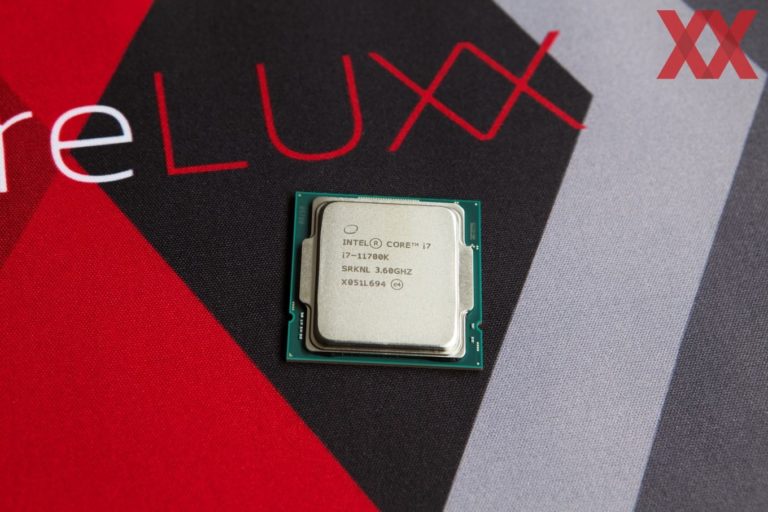 The retailer has even begun selling the CPU again after the initial stock sold out, but as of this moment, the product page is no longer accessible. This indicates that Intel has finally found a way to force Mindfactory to stop further sales.

Since the Core i7-11700K CPU has been bought on the free-market HardwareLuxx has the right to publish their review while technically still being under NDA. The publication can publish whatever they discover and learn during testing, but at the same time, they cannot share any details that were provided by Intel under the embargo.

HardwareLuxx is not calling their test a review. They do admit that their hardware may not feature the final microcode for the new series, thus the results may change when Intel releases new BIOSes. It was purchased from the retailer for 459 EUR, but it is not clear if this is the actual retail price of the CPU, thus any performance to value comparisons are not possible. The site promises a more detailed review at the official launch. 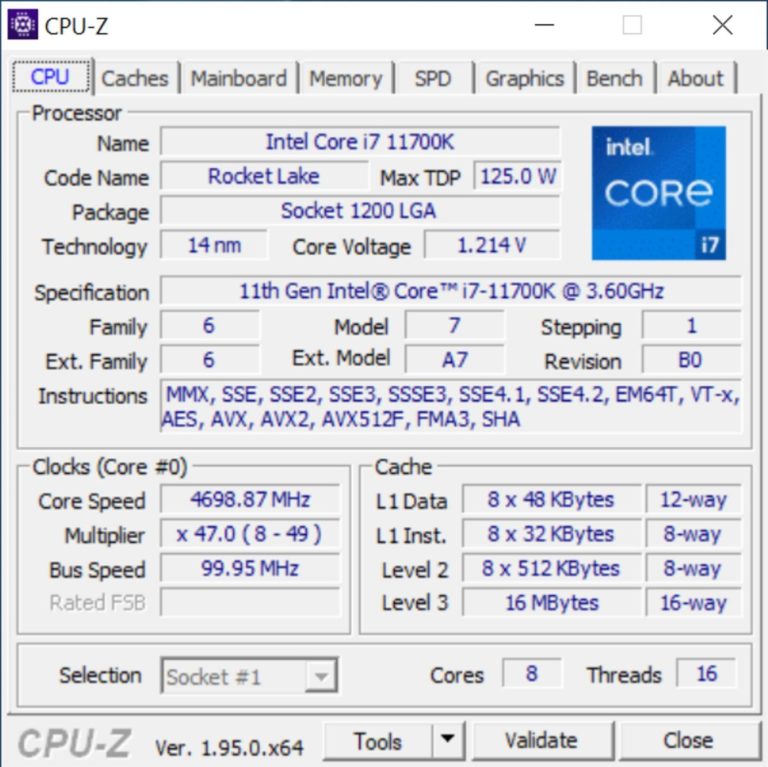 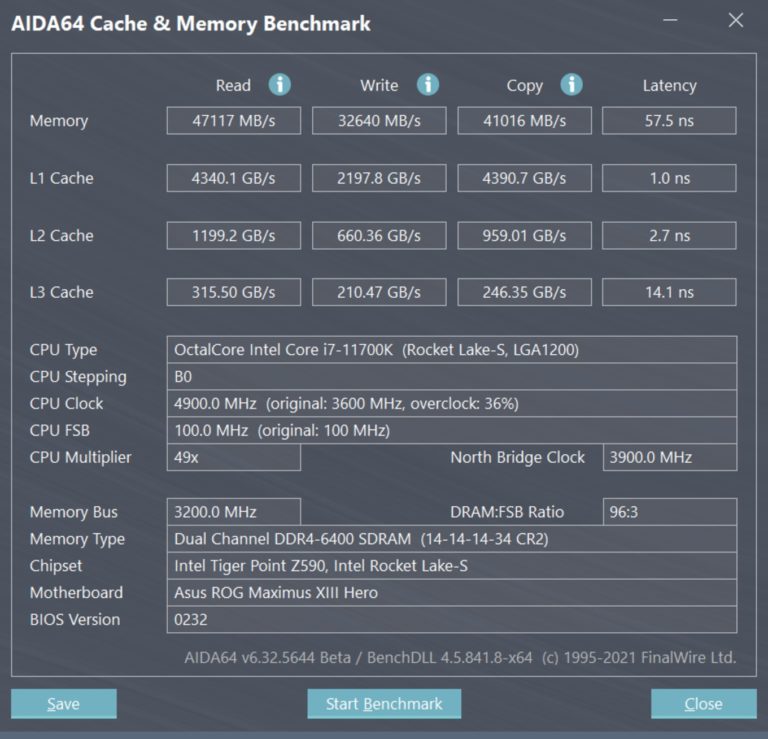 Intel Core i7-11700K is an 8-core and 16-thread CPU based on Cypress Cove architecture. It is still manufactured in a 14nm fabrication node, which is indeed the last generation of mainstream 14nm CPUs. The retail sample tested by HardwareLuxx is clocked at 3.6 GHz/5.0 GHz for base and Max Turbo 3.0 respectively. It has a TDP of 125W (PL1) and Power Limit 2 (PL2) set to 229W. The Rocket Lake-S CPU supports faster memory out of the box. The new series is fully compatible with DDR4-3200 kits, which is an upgrade over Comet Lake’s DDR4-2944. The CPU also received 4 additional PCI-Express lanes (20 in total), but more importantly, it is now fully Gen4 compatible. Last but not least, the CPU has new Xe graphics architecture on board with 32 Execution Units.

The testing platform features ASUS ROG Maximus XIII Hero motherboard (BIOS 0402) which should be fully compatible with Rocket Lake-S CPUs, but it is likely that BIOSes released later will increase the CPU performance even further. All CPUs tested in this review were using DDR4-3600 memory with the same timings (18-19-19-39). The review focuses on synthetic, rendering, and gaming tests, but we are only sharing gaming and power consumption result while encouraging our readers to read the full review. Chosen topics are probably the most interesting ones when it comes to Rocket Lake-S.

Overall, the sample clearly performs better than in the AnandTech review. It is able to able to compete with 10th Gen Core high-end models. It trades places with Core i9-10850K which is one of the most interesting CPUs of the current generation. In 3 out of 4 tests Ryzen 5000 CPUs are still offering the best gaming performance though. All tests were performed at 1080p resolution. 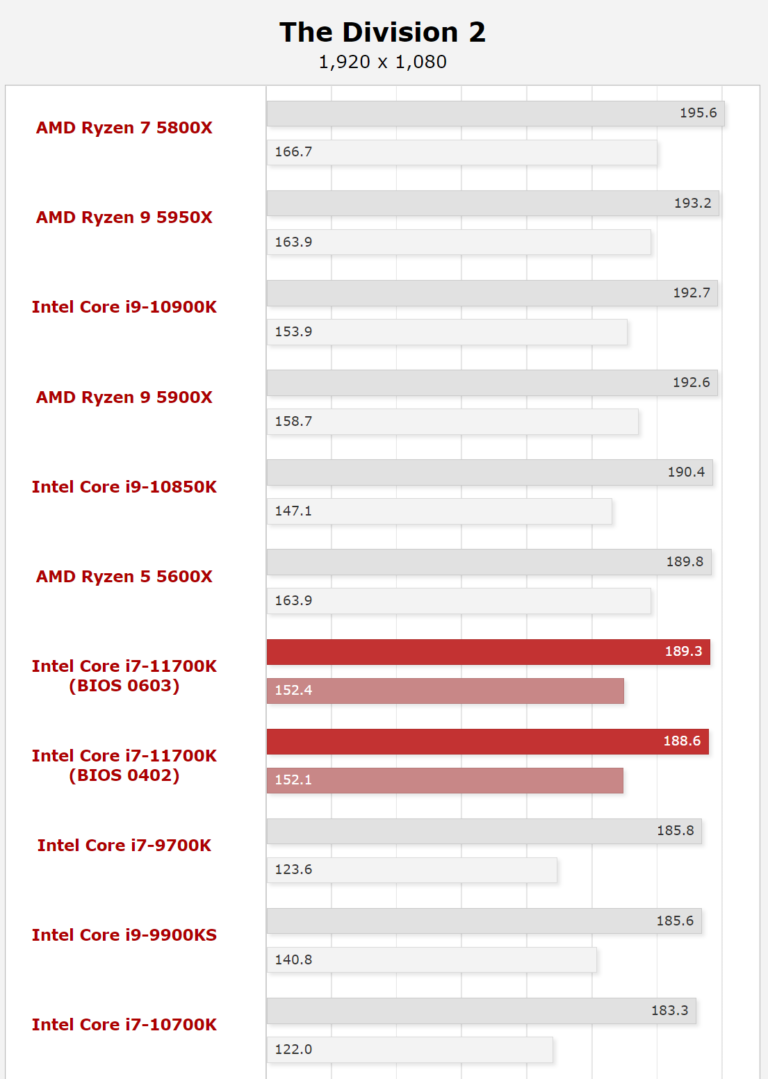 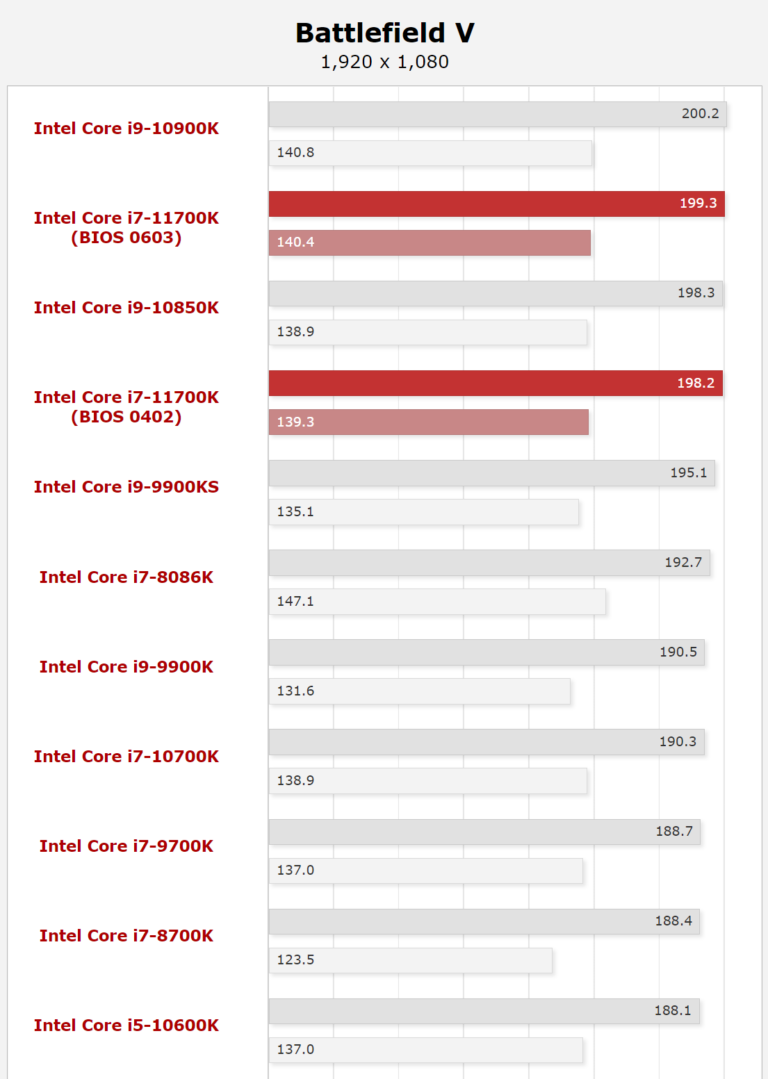 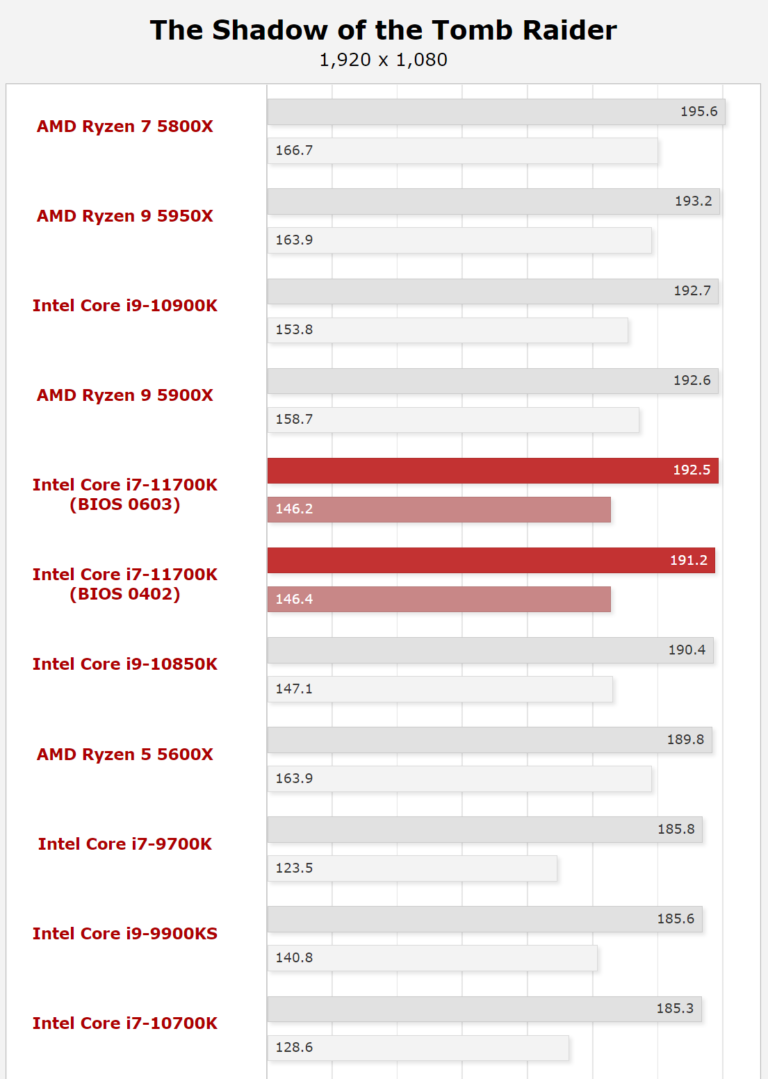 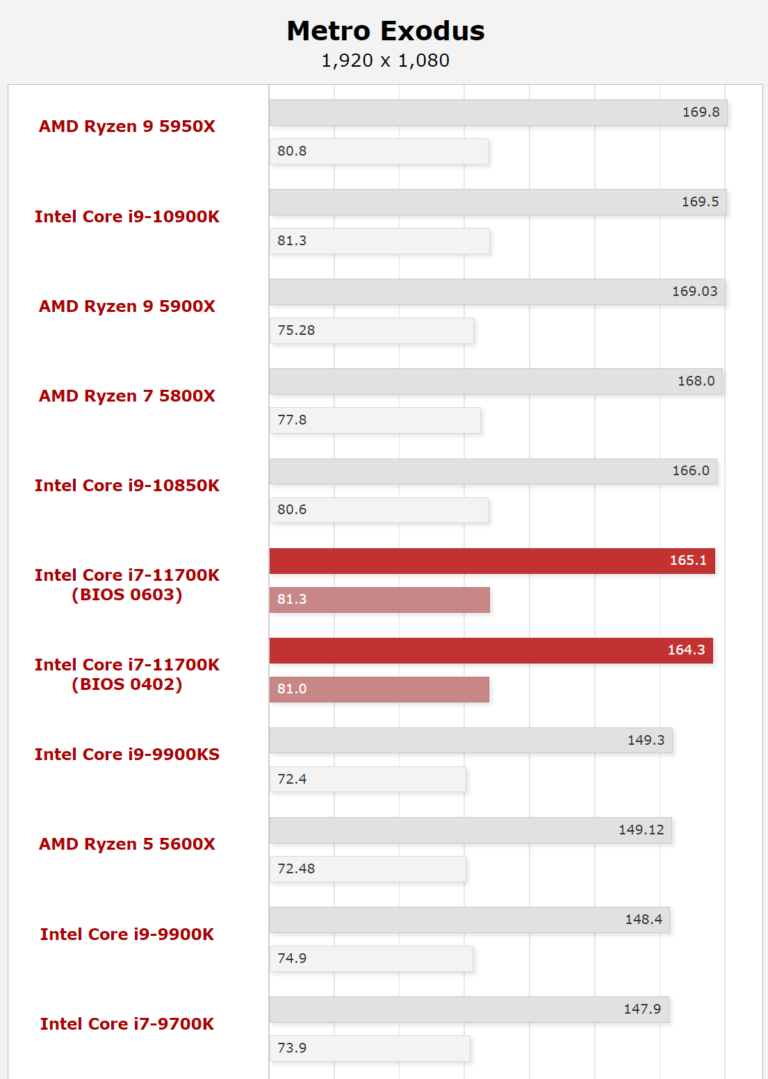 The sample was tested in Cinebench R23. It has reached a maximum power consumption of 195W right before switching to the default PL1 value of 125W. The load duration can be modified in the BIOS (probably the simplest way of overclocking), but in this case, it has been left at default 58 seconds. 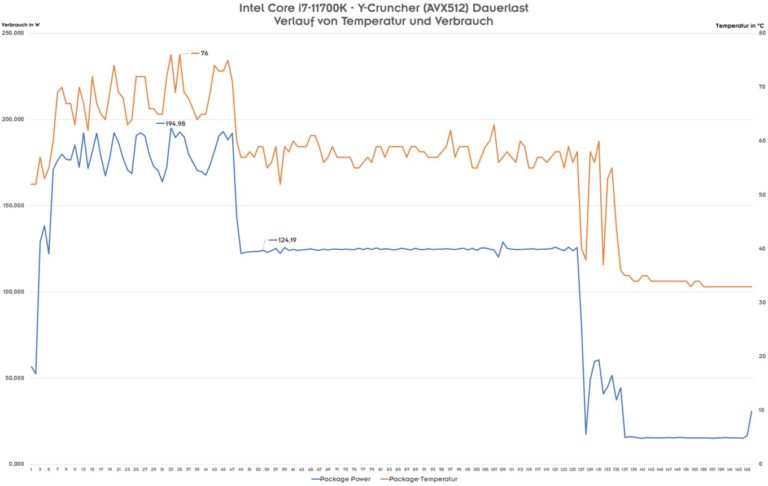 The reviewer has concluded that there is indeed a 15% performance uplift with the new generation but final conclusion is not possible till a final BIOS will be released for Rocket Lake. It is said that motherboard makers have already confirmed that at least one microcode update will be released prior to Rocket Lake-S launch, however, it remains to be seen how much of an improvement can it provide.

In Battlefield V, the Intel processors usually look quite good and this also applies to the Core i7-11700K. In Division 2, Metro: Exodus and Shadow of the Tomb Raider, the Ryzen processors still have the upper edge. […]

The power consumption does not explode in the way it was feared – at least not with the Core i7-11700K. We’ll have to look at what this will look like with the Core i9-11900K. At the same time, the GPU temperatures, be it those of the package sensor or those of the individual cores, remain within the scope of what is a solvable task for a good cooler.

After upgrading the BIOS to 0603 (the latest version), the CPU sees improved memory bandwidth and lowered latency.