The launch of AMD’s new AM5 CPUs may still be weeks away, but it appears some retailers have already received partial information on such processors. The CPU upgrades for Lenovo desktops have now been listed with some very early prices as placeholders.

More importantly, the company confirms Ryzen 9 7900 and Ryzen 7 7700 SKUs, both expected to be 65W TDP SKUs (by default). The configuration of each variant has not changed from the X-series, and they are to feature 12 and 8 cores respectively. 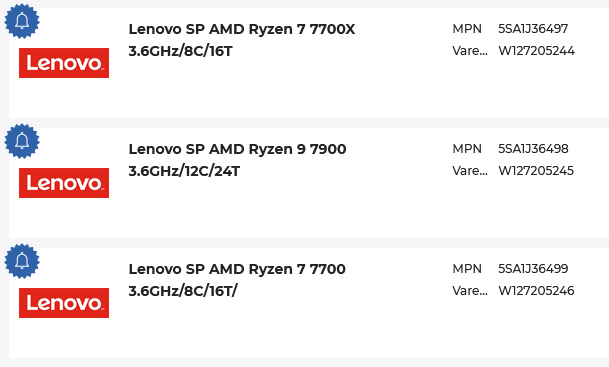 Some retailers expect the first shipment in 1 to 3 weeks. Clearly, neither the price nor the availability is confirmed. However, the specs of the new SKUs do appear to match previous rumors. The launch date is not confirmed, but it is believed that AMD will announce the Ryzen 7000 series update at CES 2023 in January.