AMD Radeon RX 6500 XT gets high MSRP from board partners

One could ask, what did consumers do to deserve this? Just a week after the formal introduction of AMD’s latest and so far the cheapest card from the RDNA2 family, it is clear that the official MSRP has nothing to do with reality. A graphics card officially arriving at 199 USD, has now been confirmed to cost at least 300 EUR in Germany.

It should be noted that board partners are not very eager to confirm MSRP these days, which certainly does not make reviewers’ jobs any simpler. After all, how can they make a final judgment if the pricing is unknown to them? Thankfully, one exception is ASUS, who despite all circumstances and ambiguous MSRPs from AMD/NVIDIA still provide their own, more realistic MSRP for their cards.

ASUS has just confirmed that its TUF Gaming model will retail at 334 EUR and its cheaper DUAL version will be available at 299 EUR. This is exactly as much as we reported last week after the first rumors about retail prices have begun to surface. 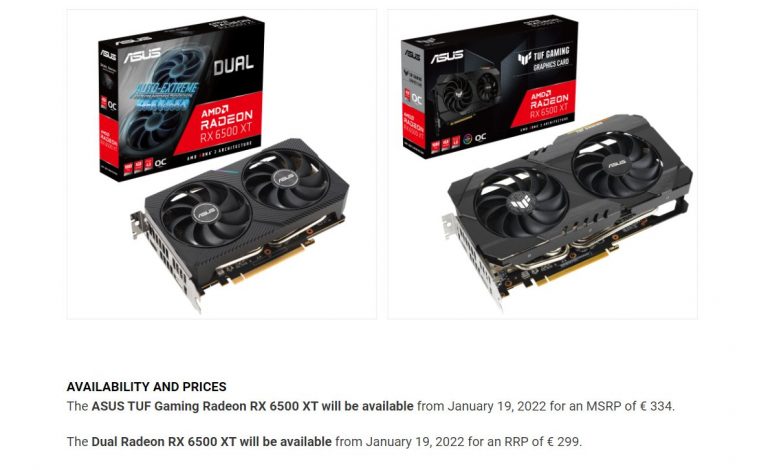 The RX 6500XT will be a very hard card to sell, considering it continues the path started with AMD Polaris GPUs, which was a good and affordable card in the 200 USD price range. The series was succeeded with a seemingly good upgrade with RDNA1 based Radeon RX 5500XT with a lower power footprint but comparable performance. With its limited 64-bit bus, PCIe Gen4 x4, and lack of AV1 decoding, H264/265 encoding, this card will be hard to choose over the GTX 1650/1660 series, which already costs just about the same as the ‘real’ MSRP.