The Next-generation of AMD Ryzen CPUs is now confirmed to offer integrated GPUs.

Upcoming Ryzen CPU series based on Zen4 architecture will all offer integrated GPU by design. While this does not mean that literally all CPUs will have iGPUs enabled, it does confirm that the mainstream Zen4 silicon will be paired with graphics for the first time. Thus, the GPU will no longer be exclusive to the Ryzen G-Series APUs.

The confirmation arrives from the leaked documents that were obtained through the Gigabyte hack. A compatibility chart for socket AM5 processors was published by Chips and Cheese. It lists three types of AM5 processors, all based on Family 19h (Zen4) microarchitecture, with on-chip graphics.

The document reportedly notes that “Some OPNs…may not support GFX”. This implies that AMD will also sell Ryzen CPUs with dedicated GPU disabled, be it fabrication failure or product positioning, but essentially those could be AMD’s counterparts to ‘Intel F-series’ CPUs which require discrete GPU, just as all Zen1-3 non-G series Ryzen processors do. 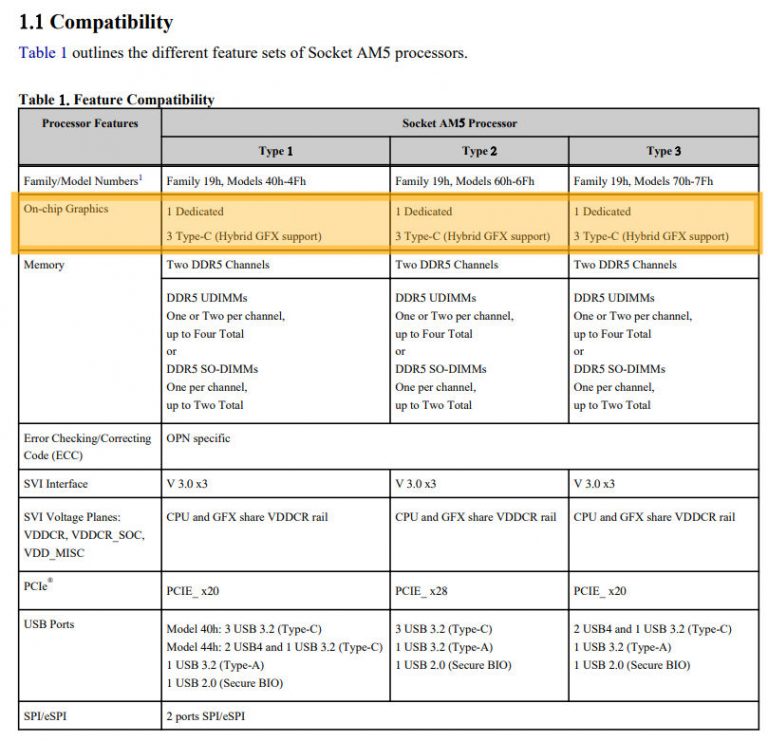 Previously leaked roadmap listed Navi2 (RDNA2) graphics microarchitecture for Raphael CPUs. This codename is associated with the mainstream processor series expected to launch as Ryzen 7000 series next year. At the same time, AMD will be updating its Zen3 APUs with Navi2 GPU. Those will launch for the mobile market on FP7 socket, but could potentially also launch as desktop APUs (either on AM4 or AM5 socket). The compatibility chart posted above clearly refers to Family 19H though, which implies Zen4 microarchitecture, in other words, not Rembrandt, but Raphael or Rembrandt’s successor codenamed “Phoenix“.

DisplayPort 2.0 not for all CPUs?

Furthermore, Chips and Cheese posted a new block diagram demonstrating the AMD AM5 platform. This diagram lists all interfaces available to the CPU and chipset. It confirms, just as noted in the previous post covering the leak on the platform, that AMD AM5 socket CPUs will have 4 more PCIe Gen4 lanes, enabling more bandwidth for secondary NVMe drive or alternatively high-speed USB devices.

What is interesting though is that the newly shared C&C diagram has a small difference when it comes to listing DisplayPort 2.0.  The previously leaked diagram specifically listed “DP2.0” indicating that next-gen Ryzen CPUs will not only have integrated graphics but also support next-gen display connectivity standards such as HDMI 2.1 and DisplayPort 2.0. The diagram that was shared by Chips and Cheese does not list DP 2.0, suggesting it may simply be a diagram for AMD Zen4 CPUs with iGPUs disabled.