Zen4 likely to be AMD’s biggest Ryzen update yet

Completely new architecture, better IPC and clock speeds compared to existing products, could put Ryzen 7000 at the top of the charts.

Just yesterday, we covered a leak suggesting that an engineering sample of Raphael desktop CPU with 8-core/16-threads is clocked at 5.2 GHz, which already represents a 10% increase over 8-core Ryzen 7 5800X. But the claims can go even higher, up to 14% according to the latest video from Moore’s Law is Dead.

The YouTuber also claims that the IPC (instructions per cycle) could increase by up to 24%. This means that Zen4 to Zen3 IPC gains would be even higher than Zen3 over Zen2 (it was officially 19% for fixed 4GHz 8-core CPU).

As a result of higher IPC and clocks, the single-thread performance would increase by 28 to 37% and so would multi-threaded, but no numbers are provided here.

An updated launch schedule for Ryzen 7000 and EPYC 7004 was also provided. But there appear to be no major changes to what was already expected. It does, however, show how many Zen4 products are to be expected in just a few months time.

What is worth noting here is that MLID reiterates the rumors about 16-core Raphael mobile series, now officially codenamed “Dragon Range”. AMD did not confirm that those ‘enthusiast’ mobile series will in fact use the same desktop silicon, however thus far nothing would suggest otherwise.

Furthermore, Threadripper 7000 series codenamed ‘Storm Peak’ make a new appearance. This codename was first mentioned by Patrick Schur back in August last year, as next-gen Threadripper, but we have not heard this codename much ever since. 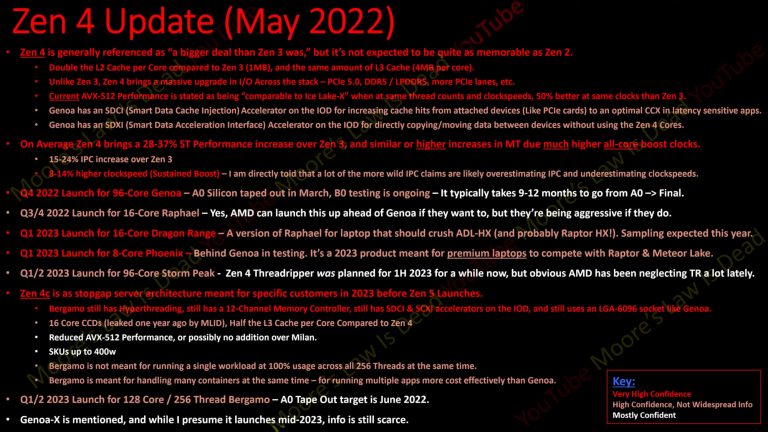 According to MLID next-gen Threadripper will feature up to 96-cores, so just as many as EPYC Genoa. The new claim is that Threadripper 7000 may now slip into the second quarter of 2023, which wouldn’t be surprising considering how much time it took for AMD to launch Zen3 “Chagall”.