AMD Ryzen series made a debut back in 2016 with Ryzen 7 1800X as the flagship SKU featuring 8-cores and 16-threads. The CPU had only a turbo clock of 4.1 GHz, which is far from the 5.0 GHz that some Ryzen CPUs can now achieve. Since the first generation of Zen, AMD introduced a number of processors featuring the new iterations of the architecture for mobile and desktop systems.

Golem tested four processors featuring the same core configuration of 8-core and 16-thread but based on different architectures. They have all been tested using X470 and X570 motherboards (depending on which CPU is supported). What is worth keeping in mind is that they have stated that the memory frequency has been set accordingly to AMD Zen architecture support. As you might know, the first generation only supported 2666 MHz memory, Zen+ had 2933 MHz support while the last two generations (Zen2 and Zen3) support DDR4 memory up to 3200 MHz. Memory can have a big impact on AMD Ryzen CPU performance.

According to Golem, AMD Ryzen 7 5800X offers 180.9% of the Ryzen 7 1800X performance in the 7 games that were tested by the site. The processor also appears to be 72% faster than Ryzen 1800X in applications. Do note that Golem editor did not compare the 3800XT which was released this July, as the CPU is based on Matisse (Zen2) just as the orignal non-X version. 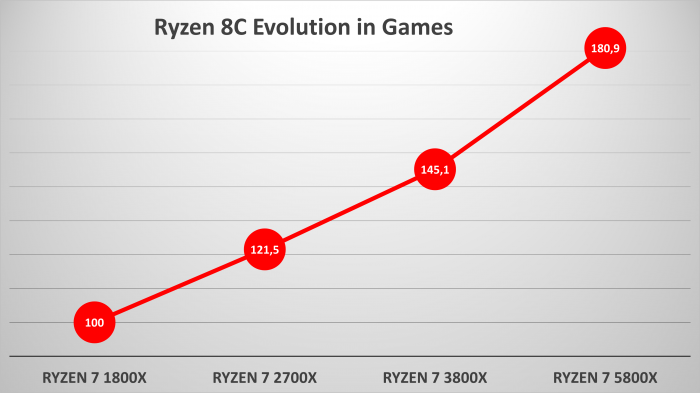 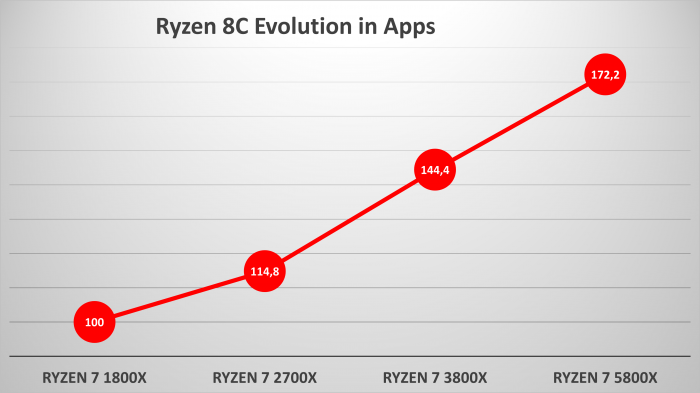 A more detailed chart has been compiled by 3DCenter, who took individual results into account and came up with the following chart:

AMD is expected to launch a new series based on Zen3+ architecture, codenamed Warhol, somewhere next year. The series could still be part of the 5000 series or launch as Ryzen 6000 instead. Meanwhile, the first Zen4-based processor should launch when AMD is ready to support DDR5 memory on the mainstream platform. The processors codenamed Raphael are expected to feature support for the new memory technology but also for a new AM5 socket.