AMD/XFX BC-160 (Blockchain Compute) cryptomining card spotted, up to 72 MH/s in ETH

AMD BC-160, a mining card no gamer asked

The Navi 12 graphics processor debuted with AMD Radeon Pro 5600M for Apple last year. It is the only known Navi 12-based graphics card, equipped with 2560 Stream Processors and two HBM2 memory chips clocked at 1.54 Gbps.

We received photos and a specs sheet from one of our readers, who claims to have information on a new mining card called AMD BC-160. This model is supposedly based on Navi 12 GPU with 8GB of HBM2 memory. The card allegedly features 2304 Stream Processors, which is less than Pro 5600M. What clearly does not make sense though is a mention of 4Gbps memory specs. It is worth noting that there were rumors about a headless Navi 12 compute card coming around March this year. 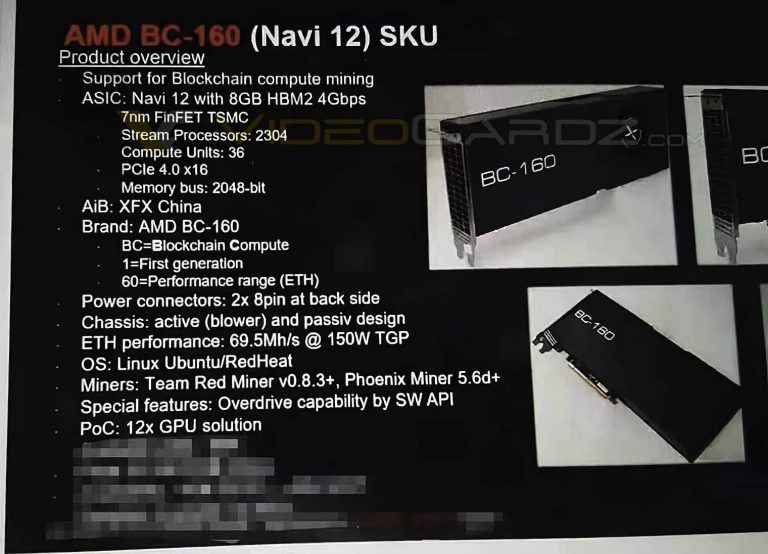 Obviously, we tried to confirm that this card even exists, but this has been quite a challenge. Board partners are not eager to talk about their crypto mining business, and none of their compute cards are listed on any website. This means that we must rely on the information presented on the slide and assume that all the mistakes in the specs are unintentional. And there are few.

The card supposedly features 8GB HBM2 memory with 4Gbps speed, which is not available for this technology. Such speed is expected to debut with HBM3 based devices, likely not with this mining card. Although RAMBUS did tease 4Gbps HBM2e chips a few months ago, we just think it would debut in such a card. Either this is a mistake or the first indicator that the specs are entirely wrong.

The naming system makes no sense either. Supposedly the first letter indicates the generation while the next two digits are for ETH hash rate performance. This way anything higher than 99 will bump the mode number higher unless no such card will ever be produced. We can also see some mistakes (such as ‘passiv’), but this is not entirely unexpected to see on a specs sheet.

A set of photos was attached to the BC-160 specs, supposedly showing the card in a cluster. Each card reaches around 72 Mh/s hashrate performance in Ethash. 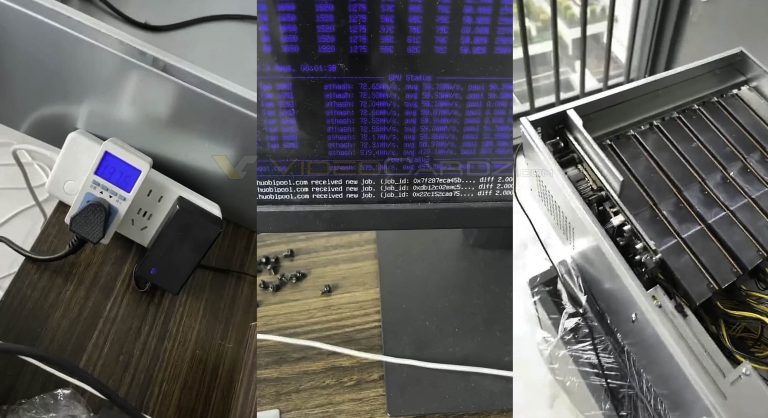 Many thanks to Mohammed for the slide!