Steam has lifted the embargo on first impressions/early review videos of the Steam deck.

Valve’s Steam Deck is a handheld Linux-based gaming console incorporating the latest hardware from AMD. The Deck is based on AMD Van Gogh SoC (also known as Aerith), a custom 7nm design based on Zen2 and RDNA2 microarchitecture. It was, in fact, the first RDNA2 APU to be announced way ahead of Ryzen 6000 series codenamed Rembrandt, interestingly this APU has still not been officially launched despite early January showcase.

There is a large list of Zen2 based handheld consoles already, but thus far none features RDNA2 GPU. This alone brings a significant performance uplift compared to now a bit outdated but still competitive Vega graphics. The console is now being extensively compared to AyaNeo, featuring Zen2 and Vega GPU. Interestingly, despite being a physically smaller console than Steam Deck, AyaNeo has a much larger heatsink for the main processor. However, this shouldn’t come as a surprise because Cezanne and Barcelo APUs (used by AyaNeo) operate at 10 to 25W whereas Steam Deck at 4 to 15W.

Earlier this week, two popular YouTube channels Linus Tech Tips and Gamers Nexus got the opportunity (and courage) to tear down the samples they received to take a look inside. This custom chip has a large Valve/Powered by AMD logo and is covered with enough thermal paste to cover the whole chip. 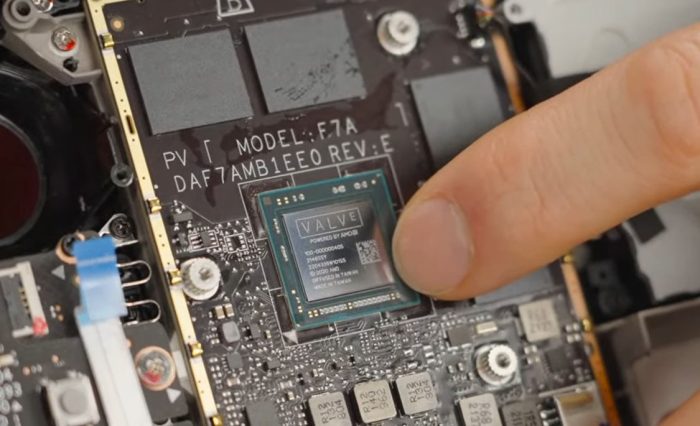 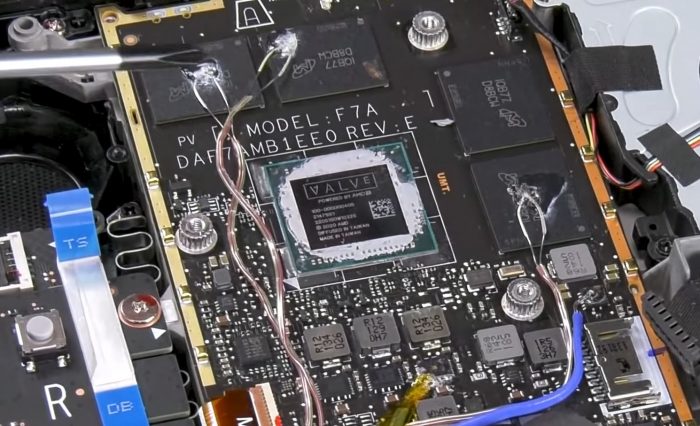 Steam wasn’t lying when they said they are not recommending dismantling the console. The complete process is complicated and may require either a lot of experience or courage. People interested in battery replacement may need to account for the fact that it is actually glued to the chassis. However, a thermal paste replacement shouldn’t be much of a problem.

The final version of the console has a different PCB color compared to the engineering sample used for Valve’s official teardown. But apart from that, there are no significant changes to the design, which is a good thing, because it means it was locked for production for a while.

Steam Deck officially launches on February 25th, which is when Valve will begin sending notifications to first customers who preordered the console last year. It costs 399 USD for the cheapest eMMC based model, which is significantly less than Aya Neo Next (1315 USD) and OneXPlayer (1059 USD).