The next generation data-center processor has been confirmed to feature up to 24 Zen4 cores.

AMD wrapped up the CES 2023 keynote by introducing new details on its ‘world’s first data center integrated CPU + GPU’. This concept has been proven useful for the consumer market, by combining CPU and GPU cores on a single die, reducing the footprint of such integration and increasing efficiency.

AMD MI300 will take things to a new level, by using 3D die stacking technology and combining the CPU/GPU cores with high-speed memory. The MI300 is confirmed to feature up to 128GB of HBM3 memory, which can actually allow the CPU to be used without external memory. 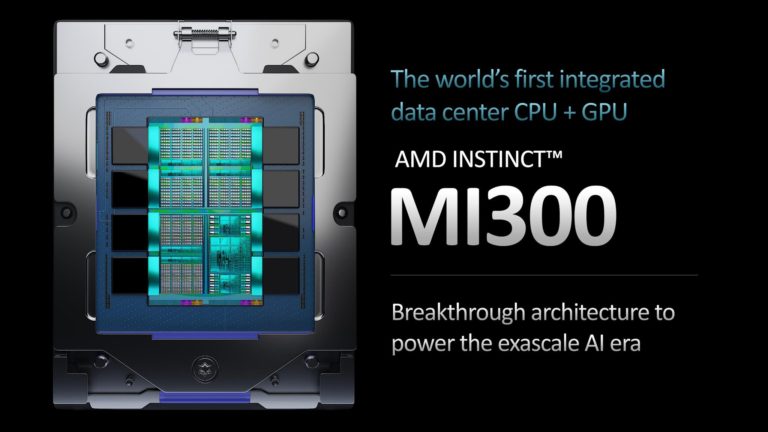 In AMD CEO own words, AMD’s new Instinct combines up to 24 EPYC Zen4 cores and CDNA3 compute architecture within nine 5nm chiplets placed on top of four 6nm chiplets. This technology will be the first time AMD is using 3D die stacking. Dr. Lisa Su confirmed that the chip is already in the labs and has showcased one of the chips during the keynote. The processor is officially coming in the second half of this year.

The MI300 ‘APU’ is a successor to MI250 based on CDNA2 architecture, which was released last year. AMD is not providing any performance figures for its CDNA3 based chip yet, therefore comparisons are not possible. But this will be undoubtedly a massive change to AMD EPYC/Instinct product stack regardless.