It appears that AMD is set to launch its Instinct MI100 accelerator on November 16th, a story from 3DNews seems to indicate. They accessed documents that are still under embargo that already list the highly-anticipated MI100 accelerator, a direct response to NVIDIA A100 (based on GA100 GPU).

The interesting part of the leak is that AMD is allegedly dropping its Radeon branding for the Instinct series of accelerators. This would be a similar decision to NVIDIA’s who already dropped the Tesla and Quadro series in favor of simpler “Axxx” branding.

The MI100 is an accelerator-based on CDNA architecture. This card will feature a new Arcturus GPU that will lack typical rendering technologies that are unnecessary to datacenter accelerators. AMD decided to split its GPU architectures for computing (CDNA) and gaming-oriented (RDNA) series, in the hope to catch a bigger part of the data center and gaming markets at the same time. 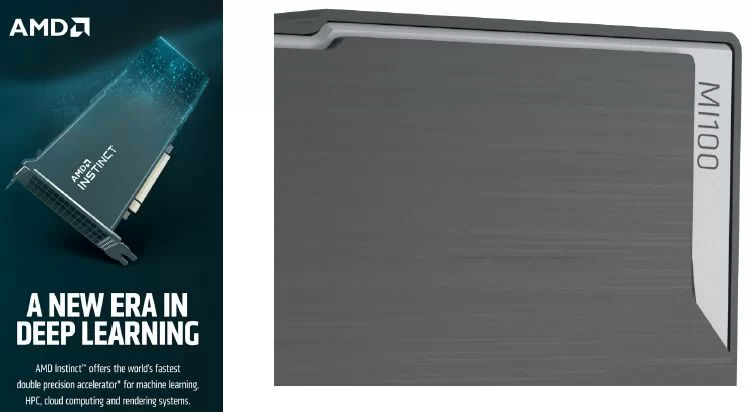 We came across this information quite by accident while studying the October edition of the AMD corporate identity book, which anyone can get from the official section company website for partners. The book was updated to reflect the new Radeon logo style, which was unified with the font used to denote Ryzen processors, and the information about Instinct accelerators was not particularly striking.

The documents are under embargo till November 16th, which is a possible date of the product announcement:

AMD is also preparing to launch Instinct V640 and V620 accelerators, another document seems to confirm: