AMD SP5 socket has been confirmed

It didn’t take long for the rumors about AMD’s next-gen SP6 socket to already find a confirmation through newly leaked photos.

Over at AnandTech forums one can find photos and schematics for the socket codenamed SP6. This socket has been explained in leaked slides as a platform for edge and telco systems, therefore, where power optimizations are just as crucial as performance. According to those slides, this socket would support up to 32-core Genoa (Zen4) EPYC processors and up to 64-core Bergamo (Zen4c) series. The power would also be limited to 225W, which is nearly half of what the full SP5 socket can support. 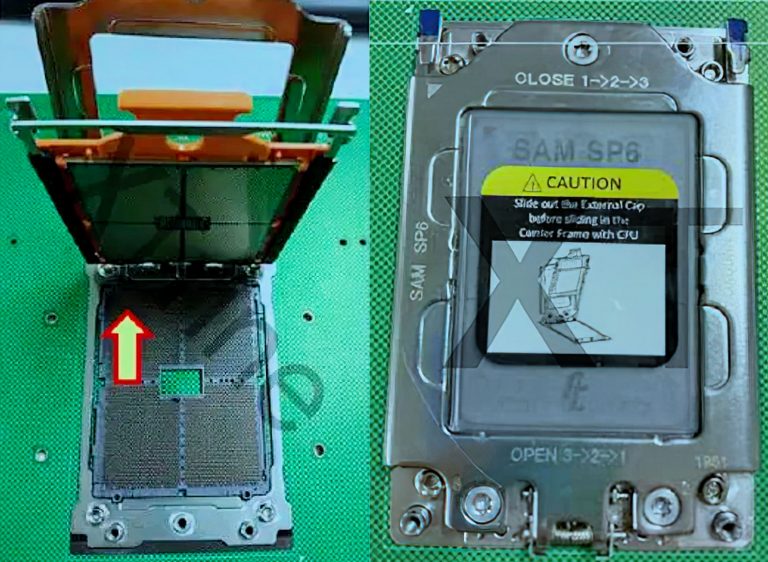 The SP6 socket looks more or less the same as the SP3 socket for the current Milan series. In fact, the size is identical (58.5 x 75.4 mm), however the SP6 has a different LGA package with 4844 contact pins. That’s a significant reduction from 6096 for the SP5 socket.

It goes without saying, but SP6, SP5 and SP3 processors will not be compatible with each other. This also means that AMD has to make two different EPYC Genoa/Turin series for each socket.

This document defines the requirements for a 4844-position, 0.94 mm × 0.81 mm interstitial pitch, surface-mount land-grid array (SM-LGA) socket—herein referred to as the Socket SP6—for use with the AMD 4844-position organic land grid array (OLGA) package that has substrate dimensions of 58.5 mm × 75.4 mm. The Socket SP6, shown in Figure 1, is designed to provide a reliable electrical interconnect between the printed circuit board (PCB) and the 4844 land pads of the OLGA package throughout the life of the product.

One of our readers made a suggestion that 4th Gen EPYC series could now be divided into high-performance 7004 series and efficiency-focused EPYC 5004 CPUs, which makes a lot of sense. Furthermore, the latter option could open more possibilities for AMD to engage the consumer HEDT market.