A member of Serve The Home forums appears to have early information on AMD Ryzen Threadripper Zen3.

STH Forum member “lihp” appears to have detailed information on EPYC 7003 launch schedule as well as Threadripper based on Zen3 architecture, which we know by its codename “Chagal”. AMD has been very careful not to share too much information on next-gen Threadripper to the public and its partners, and despite introducing the mainstream desktop Zen3 series nearly 8 months ago. In fact, there has been no new non-PRO Threadripper series since November 2019.

According to the STH post, the Zen3 Threadripper upgrade might arrive almost 2 years after the Zen2 series. It is said that AMD is expected to announce Threadripper Zen3 in August with availability planned for September. This would corroborate earlier rumors from KittyYukko about a possible August unveil. 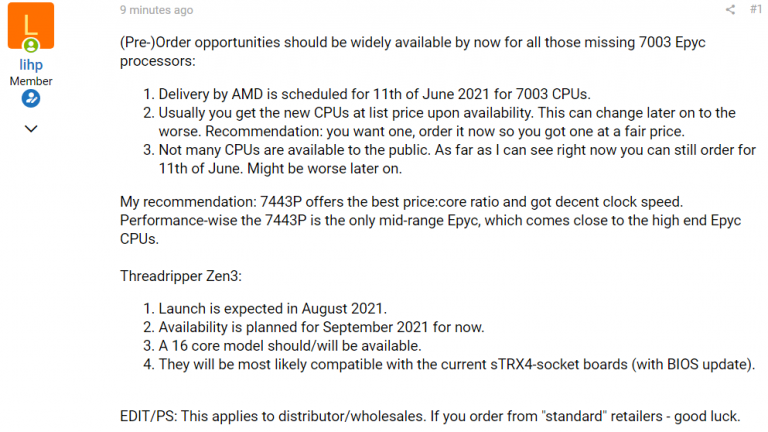 Furthermore, it is said that Zen3 Threadripper with 16-core is still on the table. This is a reminder of a much earlier rumor back from January when Yuri Bubliy has said that Genesis might come with 16 cores. At the time ‘Genesis’ was associated with the Threadripper Zen3 series till we learned about a new codename “Chagall”.

According to our information, AMD has still not provided the necessary microcode update for existing TRX40 motherboards. As soon as this happens we should be seeing a lot more leaks on the next Threadripper series. Interestingly, it has still not been determined whether Zen3 Threadripper is called the “5000” or “6000” series. For now, it is believed that Zen3 TR might be 5000 series, simply because there have been no leaks on possible Zen3+ architecture coming to the HEDT platform. However, should AMD launch Rembrandt, Warhol, and Chagall all featuring alleged Zen3+ architecture, it would make perfect sense to put all products under the 6000 series.

Many thanks to Wasmachineman_NL for the tip!