It seems that the leak that surfaced four days ago was indeed real, as new traces on the upcoming Thredripper series existence start to appear on other benchmark sites.

AMD Ryzen Threadripper 5000 Series codenamed Chagall will be released this year. Evidence that AMD is already validating the platform exists on benchmarking websites. The latest is from the Puget System benchmark site which recorded an Agisoft MetaShape 10 test featuring the PRO 5995WX processor. Unfortunately, there aren’t that many results featuring this software in the Puget database, not to mention any current-gen Threadripper CPU to begin with. In other words, it is not possible to compare those values yet. 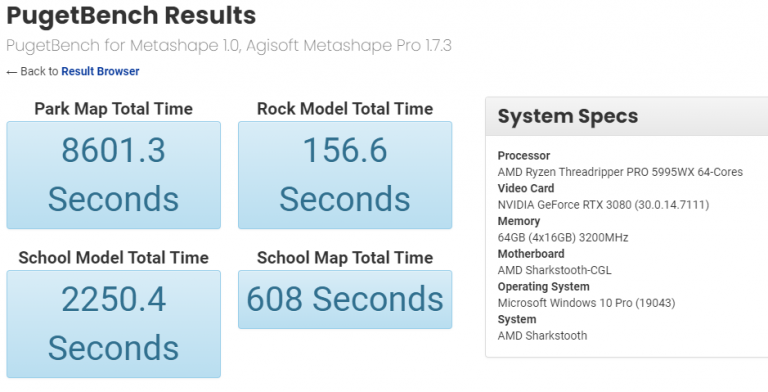 Recorded render times are for four tests in Agisoft Metashape 10, a photogrammetry software which means it creates 3D objects from photos. The 5995WX required 8601 seconds for Park Map, 2250 seconds for School Model, 156 seconds for Rock Model, and 608 seconds for School Map, all being Puget Systems predefined rendering scenarios.

What this leak has revealed though is the codename of the AMD reference platform for Chagall, which is “Sharkstooth-CGL“. This is a validation WRX80 motherboard for the PRO series and it is unclear if the same codename is used for the non-PRO series, which surprisingly have not appeared in any leak yet.

While AMD Chagall will not introduce higher core count SKUs than the Castle Peak series, it will focus on a microarchitecture upgrade to Zen3. The Threadripper 5000 series should be compatible with existing TRX80 and WRX80 motherboards. At this moment it appears that AMD is targeting Q4 2021 for the release.