The company has now briefed the press on the upcoming Threadripper PRO 5000 series. There is no sign of the non-PRO series, and it seems AMD will be focusing on system integrators first. The 5000 series Threadripper is initially coming to Lenovo ThinkStation P620 systems, with others to follow.

AMD confirmed there are indeed five Threadripper PRO 5000 models, led by 5995WX with 64-cores and 128-threads. Interestingly, all SKUs have the same boost clock of 4.5 GHz, but their base clocks are different.

While there are no 48-core parts in the series, the company will be releasing 32-core 5975WX with a base clock of 3.6 GHz. This part will therefore have 100 MHz higher base and 300 MHz higher boost compared to its predecessor based on Zen2 architecture. 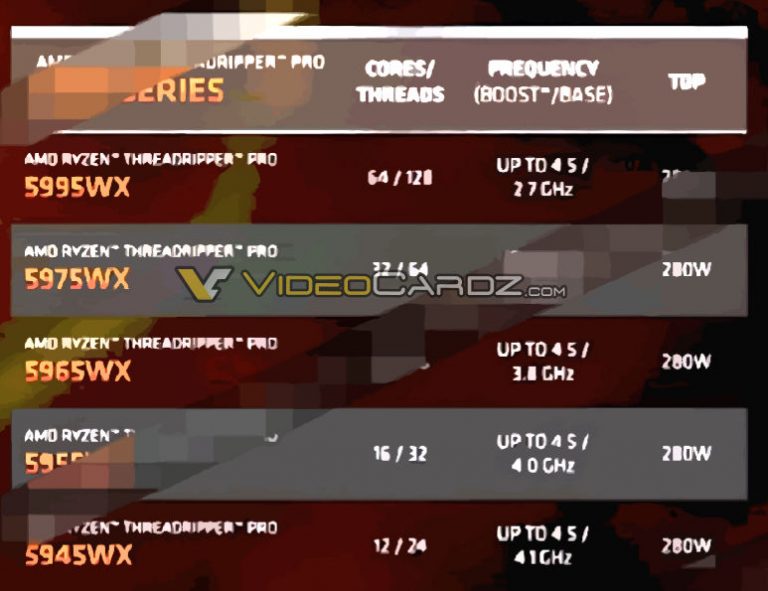 AMD Ryzen Threadripper 5965WX is to offer 24 cores and 48 threads. This part will be clocked at 3.8/4.5 GHz respectively in base and boost states. Furthermore, AMD will be launching 16-core and 12-core parts known as 5955WX and 5945WX. Those will be the only parts with base clock above 4.0 GHz.

All SKUs come with 280W TDP by default, which is the same power as Threadripper 3000 series. The press deck does not mention which motherboards are supported, but one would guess these are compatible with existing WRX80 motherboards after a BIOS update.