In the latest video, Moore’s Law is Dead shares the most detailed information on AMD Zen3 based Ryzen Threadrippers thus far.

AMD Threadripper 5000 series would debut in November 2021, this is the most important thing that was revealed by MLID in the video. This is contrary to previous reports which have even suggested a possible August/September announcement. While it is typical for AMD to announce products sooner (even a month in advance), it would seem strange if AMD really did announce Chagall in August and launch it in November. That said, it is likely that the date has shifted once again, assuming that MLID’s information is correct, but he does have high confidence in this rumor.

MLID also revealed that AMD Ryzen Threadripper 5990X will feature 64 cores, just as many as the current HEDT flagship, the 3990X. AMD is neither going to upgrade memory from quad-channel DDR4-3200 and nor it will add more than 64 PCIe Gen4 lanes to their non-PRO series. 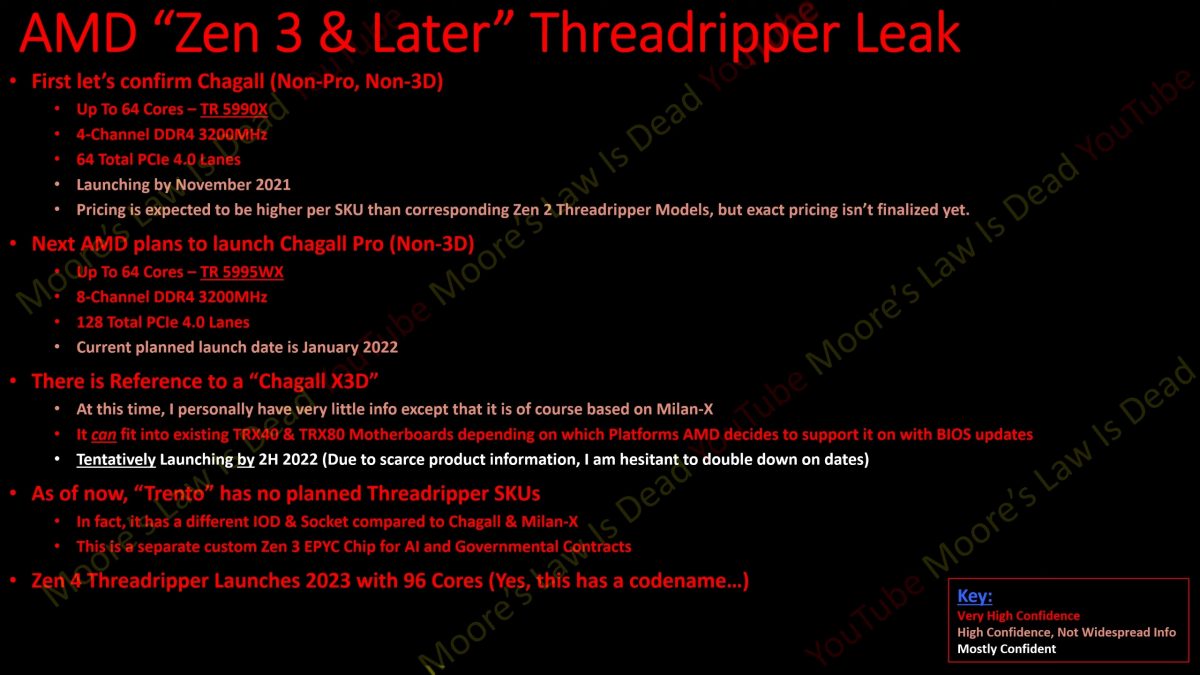 And speaking of PRO, MLID also has information on Threadripper 5000 PRO. Those series are allegedly launching in January 2022. With the best SKU codenamed Threadripper PRO 5995WX offering up to 8 channel DDR4-3200 memory and up to 128 PCIe Gen4 lanes. Those specs have not changed since PRO 3995WX SKU either, but the CPU is to offer a higher clocks and new Zen3 architecture.

Additionally, MLID revealed that references to Chagall X3D can already be found, although the YouTuber does not specify the source of this information. This variant of Threadripper would be based on Milan-X (EPYC) which has also recently started to appear in the rumors. The X3D obvious refers to AMD 3D V-Cache, which the manufacturer announced back in June. This advanced packaging technology adds a new layer of L3 Cache on top of the compute tile. It would seem that X3D will make its way to consumer HEDT and HPC products too, not just consumer Ryzen X3D series which have officially been confirmed by AMD to enter production later this year.

AMD Chagall X3D could launch by the second half of 2022, YouTuber claims.